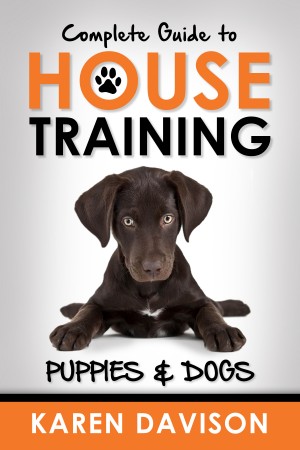 About the Author
Karen Davison grew up in a large town in Bedfordshire, but as a child, her love of animals always drew her to the countryside, horse riding on weekends, come rain or shine. When she was eight, the family got their first dog, Scamp, who's great character started Karen's lifelong love of dogs.

Fascinated by their intelligence and complex social behaviour, Karen studied canine psychology, and the more she learnt, the deeper her appreciation of dogs grew. Karen has been working as a professional dog trainer and canine behaviourist since 2001.

Now she is living the dream. Karen resides in a country cottage on the west coast of Ireland, where she lives with her husband, two daughters and nine special needs pets. Her seven dogs and two cats have a mixture of emotional, behavioural and physical disabilities. With her expertise in dog behaviour and many years veterinary nursing experience, she is in a unique position to take on those animals that might not otherwise have had a chance for life.
One of Karen's favourite sayings: 'Saving one dog will not change the world, but surely for that one dog, the world will change forever.'

Her first book, The Perfect Companion, Understanding, Training and Bonding with your Dog published in June 2012, condenses Karen's knowledge and experience into one concise and comprehensive guide to canine psychology, training and problem solving, is an invaluable edition to any dog owner's library.
Since then she has published Complete Guide to House Training Puppies and Dogs and two Fun Reads for Dog Lovers - It Shouldn't Happen to a Dog Trainer and A Dog's Guide to Humans.

Karen Davison grew up in Bedfordshire, England. She has been both an avid reader and a lover of animals since early childhood. When she was eight, the family got their first dog, Scamp, whose great character started Karen's lifelong devotion to dogs.

Since qualifying in Canine Psychology in 2001, she has worked as a professional dog trainer and canine behaviourist. She went on to study Wolf Ecology in 2009 and was lucky enough to spend time with the wolves at the UK Wolf Conservation Trust in Reading.

Her first publication, The Perfect Companion: Understanding, Training and Bonding with your Dog, a comprehensive guide to canine psychology, training and problem solving, was published in June 2012 and won an IndiePENdants' award for quality. Since then she has published The Complete Guide to House Training Puppies and Dogs, Companion Huskies: Understanding, Training and Bonding with your Dog, and three Fun Reads for Dog Lovers: A Dog's Guide to Humans, A Dog's Guide to Cats and It Shouldn't Happen to a Dog Trainer.

After joining a local writers group, she has spread her author wings and is now enjoying writing poetry, flash fiction and short stories, and after taking a course in screenwriting has just completed her first radio drama script. Karen is also working on her first fiction novel, which combines her love of writing, wolves and fantasy - Wolf Clan Rising which is due to be published 2017.

Karen is now living the dream, she resides in a country cottage on the west coast of Ireland, drawing inspiration for her writing from the peace and beauty of her surroundings where she shares her life with her husband, two daughters and nine special needs pets. Her seven rescue dogs and two rescue cats have a mixture of emotional, behavioural and physical disabilities.

One of Karen's favourite sayings: 'Saving one dog will not change the world, but surely for that one dog, the world will change forever.'

The setting sun filters through the forest, casting golden rays that dance with the spirits of the living canopy. Through the dappled sunlight, a lone wolf moves on silent paws along the narrow trail, his powerful legs cover the ground at an easy trot.
Far to the north, the distant howls of stranger wolves carry to him faintly on the wind; he pauses, pricking his ears towards the sound. Licking his nose he inhales to explore his surroundings.
The north east wind brings with it the scent of snow from the high peaks and the freshness of the White Water river. Close by, rain and earth, the souls of trees, and spirits of a myriad living things that inhabit the forest. The wolf smells what is and also, what has gone before. The older scents are fainter, like the tracks of ghosts.
He registers this in a few heartbeats then lifts his muzzle and flaring his nostrils, casts his mind out further still, seeking the one scent that has caused such restlessness. The one that surrounds him, an invisible force that pulls him further and further away from his pack.
The scent of the she-wolf.
On the wind, a minute trace of what he seeks causes his heart to race. He lifts his head and raw emotion flows from his lips, quietly at first, rising and falling until the air is filled with a long and wavering howl. Caught by the wind, it travels through the forest.
Away to the south his own pack add their song, their voices weaving around his, wrapping him with warmth and comfort, and bringing with it an overwhelming sense of loss.
In the midst of the voices, he hears his soul brother calling to him. His chest tightens and for a moment he looks back over his shoulder but as twilight descends, the faint cry of the she-wolf beckons him north.

About the Series: Positive Dog Training

Kind, positive reinforcement training for dogs. No force training techniques that build a strong relationship with your dog. Reward based methods that get great results - fast.

You have subscribed to alerts for Karen Davison.

You have been added to Karen Davison's favorite list.

You can also sign-up to receive email notifications whenever Karen Davison releases a new book.