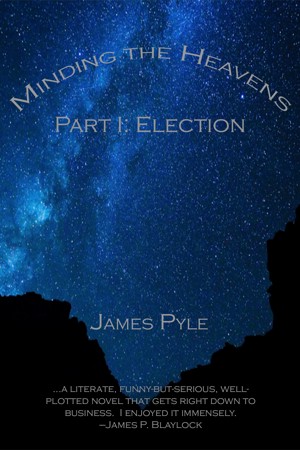 Election, Minding the Heavens Part I

Rated 5.00/5 based on 1 reviews
In this first of three novellas, Lawrence Fielding, your average mid-twenties underachiever, is suddenly and inexplicably swept into a conspiracy that includes foul mouthed demons, a drunken angel, an enigmatic billionaire, a cold-blooded mercenary, a new branch of theoretical physics, and the devil himself. More
Minding the Heavens is a series of three novellas that chronicle the intersection of four distinct stories.

1. Lawrence Fielding is in his mid-twenties, works for his uncle (whom he hates) and has recently broken up with his longtime girlfriend. He is determined to kill himself until a chance encounter with a man claiming to be the devil starts him down a path of curious, and seemingly inexplicable, incidence.

2. Michael, once an angel of the Host of Heaven, is now a drunk who has wandered North America for the better part of five decades.

3. Samuel is a reclusive assassin who, just as he decides to retire, is offered one final opportunity unlike anything he's ever done before.

4. Diedrich Markus was, at one time, a promising young physicist. That is, however, until he published a paper claiming to have found evidence that the fundamental laws of quantum mechanics work differently within the Trans-America building in San Francisco. After several unaccounted years, Markus resurfaces at a small, decidedly hippy-like, university in Western Washington.

James Pyle spent a very long time, and a lot of money, in the pursuit of three marginally useful degrees at two private, and expensive, universities in Southern California. After many of years of rejection from major publishers, he finally decided to take the advice of others and digitally self-publish. The Minding the Heavens series is his first foray into that world and he hopes you enjoy it.

James has worked variously at a driving range, pizza place, concert and sporting venues, a gym, several bookstores, several movie theatres, a video game company, a legal publishing company, an advertising agency, and an electronics store. He has also spent time as a TA, a freelance writer, a freelance editor, an English professor, and a college administrator.

Despite the rampant divorce rate, James married his high-school sweetheart and they went on to have three children (well, two with one on the way as of August 2012).

James isn't sure he enjoys writing about himself in the third person but would certainly welcome any comments, suggestions, corrections, or complaints.

This was an amazing read. Easy to.follow, though it had more than one main plot line, with exceptional writing throughout. The only thing I disliked was realizing I couldn't read the other two books yet! It's interesting and curious and the descriptions throughout are well written and easily imaginable despite the fantastical nature of many of them. I will be recommending this to many people.

You have subscribed to alerts for James Pyle.

You have been added to James Pyle's favorite list.

You can also sign-up to receive email notifications whenever James Pyle releases a new book.