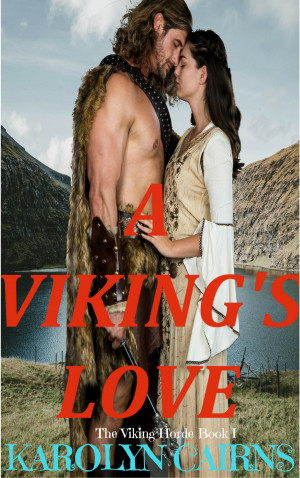 Karolyn Cairns-Black lives in West Virginia with her husband Adam and three rescue dogs. She's busy at work. Its been a great year. She just wrapped up the fifth and sixth installment of The Wicked series in two parts, both available now.
The follow up novels in The Viking Horde series are underway. Collin and Meghera's story titled A Viking's Heart is in works, the third in the series. The fourth installment about Joran and Allisande's son Storm is finished, to be published on the heels of A Viking's Heart. Two more novels are intended about their daughters Star and Wynter.
Karolyn also writes suspense thrillers under the pen name KJ Black. The Gift Horse, her second novel was a finalist winner in the Greenlight Award Contest.
Karolyn enjoys reviews and comments from her readers. She thanks you for all your encouragement and support!

About the Series: The Viking Horde

Also in Series: The Viking Horde

The book was good first half , then it just became anti climatic all the way till the end . A case of too much , which if wrapped up half the length , it would have been just enough .
The writing grammar was good , but the stories focus ran too much( second half ), on the on the multiple secondary characters and their stories . Which did not gel very well with the story and was repetitive .
The heroine was her own woman at first and just went out of character after that , lost it's appeal to me and i just was skimming by the second half .
Love scenes were erotic and sensual . *rough rape scenes

This book is awesome!!! It ranks way up there with the Julie Garwood's and Judith Mcnaught's! It was soooo satisfying, the conflict, the love, the fights, the romance...you dwelt on each theme appropriately so there wasn't any sense of it being rushed. The author knows how to write! I have bought about 4 of your books now and I am not disappointed in the least. I would highly recommend!

You have subscribed to alerts for Karolyn Cairns.

You have been added to Karolyn Cairns's favorite list.

You can also sign-up to receive email notifications whenever Karolyn Cairns releases a new book.