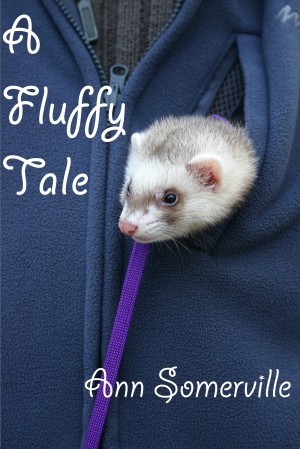 Reviews of A Fluffy Tale by Ann Somerville

This was a really sweet book, I enjoyed it immensely.

Overall
The blurb for this story doesn't do it justice. Here we are introduced to Julian and Mr. Talk, Dark and Grumpy. I was also under the impression this was a short story (I missed the word count and the use of the word "Tale" in the title made me think short story for some reason). Still, I trusted the author and the blurb enchanted me enough to give it a try.

I enjoyed this story, although it felt like two parts of one story as the first half "fixes" Julian and the second half "fixes" Zachary. To that end, I was expecting something different to happen than what did, but that's my fault for assuming. In the end I was pleased with how everything figured out and the path that was taken to get there. A slow, sweet romance that is perfect for a nice lounging read.

Strengths
The kems (ferret-like creatures that have a physical presence, but are capable of vanishing into their host's body) are absolutely adorable. I'd re-read this story again on their presence alone. Each kem, like each host, has a unique personality and that personality does not always mesh with their host. Not much is explained about them, because people don't seem to know anything much about them. It doesn't really matter much for the story. Their presence is enough.

The pace at which events progress and information is revealed works to slowly build the characters, both their background (and baggage) and also their evolution into the characters they are at the end.

While the length and pace are a little slow, I feel for the story being told, it was appropriate, as sudden changes would seem uncharacteristic. While not an action-packed story, it rests on its own merits and is very nice for a mellow day's reading.

The kems and Leo bring a wonderful flavor of character to this story with their playfulness and plotting nature. The serious nature of the two main characters and their relationship is balanced by these other characters, lightening tense moods and raising the spirits of the main characters. They almost play the part of children, helping action along, making mischief happen, and otherwise goofing off.

Weaknesses
This is may be something that only bothers me, but this toed the line of "the rich man swooshes in to rescue the poor man." It's not that type of story, although there are definitely elements of it (mostly at the fault of pushy Leo, who I loved). Still, if rich men getting what they want annoys you, even if it helps the not-quite-as-rich, consider this a head's up. However, I don't think it will bother most people.

The nature of this story does not lend it to a fast pace, and parts in the middle dragged a little. Worth reading, but this isn't the story to turn to if searching for an action-packed novel.

Be sure to check out my other reviews on my blog.

Let me tell you this…this was as far as the most adorable book I’ve read in age. Ann Somerville wrote a beautiful relationship between kem and human. The kems were actually portrayed as the ferrets.

If I understood it correctly, kems couldn’t survive without humans. Somehow, the kems were emotionally connected to their masters. Whatever bad thing happened to their masters, the kems suffered. It was fantastic how Ann wrote the behavior between human and kem.

Julian was somewhat an idiot man who didn’t understand his own kem, Pyon. With a lack of affection from Julian, Pyon became a pet that was unable to control. In result, it nearly cost Julian his job.

Zachary came in and saw how Julian treated Pyon. He got angry and scolded him how to treat Pyon appropriate. Julian obeyed because he really loved Pyon.

The emotions between Julian and Zachary were wonderful. It was amazing how the kems brought them together over and over. It was as if the kems were their guardian angels.

The minor character was adorable. Zachary’s Uncle Leo. I wished I have an uncle like him. :)

Here’s a question for y’all, did Zachary finally gave in and gave Julian a chance? Did they end up becoming an item?

It is highly recommended for you to buy and read it. You won’t be disappointed. It’ll make you laugh, smile, chuckle, angry, frustrate, grumble, and so many different emotions in this book.

(reviewed the day of purchase)
Estara Swanberg reviewed on Aug. 17, 2010

I read this free on the site and actually made it into my own epub, because I loved it so much (I did tell the author and send her a copy). I'm so pleased I can finally buy it! Apart from the Darshian Tales, this is my favourite Ann Somerville story so far. It's also the least overtly sf/fantastic of the books I've read by her yet.

Although it has one of the cutest animal-sidekick ideas I've ever found (ferret-like kems), the book is concerned much more with how people deal with pet care, health problems, age, childhood misery and emotionally stunted development - all of this while falling in love and trying to build a relationship ^^.

I adored the portrayal of the older mentor character in Uncle Leo and the way Zachary wasn't your tall, dark and handsome rake stereotype and all the humor! Julian himself has his own very necessary emotional growth and both he and Zachary complement each other by the time the story is over.

I'm a bit sad the author didn't include the extremely short little tidbit about Uncle Leo she has on her site, but you can always read it for free: Uncle Leo goes shopping.

You have subscribed to Smashwords Alerts new release notifications for Ann Somerville.