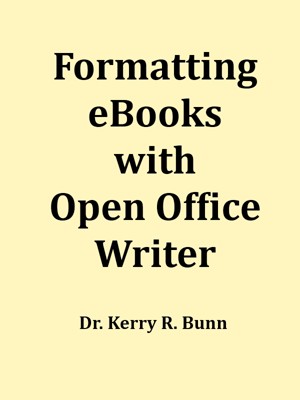 Dr. Bunn is the Senior Pastor of First Baptist Church of Ringgold, GA. He was ordained to the Gospel Ministry in February, 1975. He and Cathy Lee Prince Bunn have been married for over thirty-five years. They have two adult children and seven grandchildren.

Dr. Bunn's first experience with computers involved the Timex Sinclair 1000, the Vic-20, Osborne, TRS-80, CPM 2.0, DOS 1.0, and Xenix. He began building PCs as a hobby in 1985 and has written many shareware programs and several commercial application in the 80's and early 90's. He was a beta-tester for the original Logitech hand-held scanner and SuperBase Four. Simple, clear, step by step computer instructions are his emphasis. He has graduate worked toward the Master of Business Administration and Master of Information Systems degrees at Georgia College and State University

The best guide on the market for formatting eBooks, and a godsend for those of us who use OpenOffice. Worth ten times the price. Many thanks, Dr. Bunn.

(reviewed the day of purchase)
Shondra Snodderly reviewed on June 30, 2013

This is an essential guide for anyone looking to publish here using OpenOffice. I find myself referring to this book again and again when I get ready for publishing a work. Definitely worth the price!

This book is written in a very clear, concise manner. I haven't tried formatting a table of contents yet with this, however, the information on styles really helped me format my e-book correctly for Smashwords. If you need something to help translate the Smashwords Style Guide into Open Office terms, this is a great resource.

A must have for all Open Office users. Nailed the conversion on the very first try with my book. The section on how to set up a hyperlink TOC was worth it alone (something that was making my head ache). $2.99 is a LOT less than caving in and getting MS Word.

Oh, and thanks, Aussie Scribbler for the tip on using 97/2000/XP format for the .doc file.

This is a great manual for those of us who don't want to buy Word to format our ebooks. It is clearly written and organised so that it is easy to skim through and find information on just the issue with which you may be struggling or to proceed step-by-step from the beginning if you are just starting out. Between this and the Smashwords Style Manual you will find all you need to be empowered to do it yourself.

The one tip I would give to Smashword users specifically though is to save your documents in the Windows 97/2000/XP format. Bunn's manual is not specific to Smashwords so he tells us to save in the format required by the eConverter, as this might vary. For some reason I thought Smashwords required a Word 95 document. When I tried saving in that format, I lost my hyperlinks. When I saved in 97/2000/XP everything worked perfectly and I ended up with ebooks which were accepted into the Premium Catalog.

I've owned this book for quite a while, and it really has helped with my formatting. There just isn't anything out there specifically for Open Office (and I have a hunch it will work with Libre Office, since Open Office is in limbo as I write this review). With the author's step-by-step guidelines, I can now format chapter headings and paragraphs with no fuss. No fluff here. If you're a refugee from Word, this is the book for you.

I have to hand it to Kerry Bunn, he's done a great job of making this simple. I learned a lot, and I'm grateful. Sadly, though, no matter how hard I tried or how carefully I followed his instructions, I couldn't get my Open Office versions of Word to upload correctly. I got close--very close--but not close enough. When I figured I couldn't stand any more frustration, I broke down and bought a copy of Word. *That* fixed the problem (and much of what I leared from Bunn's work carried over. I still don't like MicroSoft, and having to buy their software feels like surrender, but my peace of mind is worth something, too.

Absolutely a life saver. I was having trouble with that damned auto-formatting in Star Office ("Open Office" the free version of Word--but by Sun instead of Microsoft). I had beautifully published print books and my ebooks were just coming out like crap. I had no idea how easy it was to create new styles and apply them globally. BLAM! Problem solved. That one trick was worth ten dollars easily, so $2.99 for the book is a steal. I was able to reformat my first two books on Smashwords and IMMEDIATELY got into the premium catalog on my first try.

This book helped me format my books, which have LOTS of images (ebook nightmare). I had been fighting with them for weeks, too cheap to hire someone to do a poor job. I knew the limitations of ebook technology and wanted to do this myself. This book saved me from throwing my computer against the wall. Ebook formatting can be so impossible, and there is almost no reliable information on "Open Office" formatting for ebooks on the internet. Trust me--I looked. I read every free piece of advice one can find--and what they say about free is true. It's worth nothing. Don't worry about the 3 bucks. You will never miss it and this book will help you get your book formatted quickly--even if you read through it like I did going "yeah yeah I know all this, why am I--Oh! that's exactly what I need!"

Would you like to favorite Dr. Kerry R. Bunn?

You have been added to Dr. Kerry R. Bunn's favorite list.