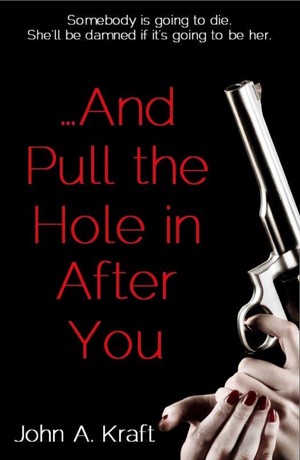 ...And Pull The Hole In After You

John A. Kraft is a writer living and writing in Terre Haute, Indiana. He moved to the Midwest after 25 years in California where he worked as an actor, comedian, voice-over actor, as well as a writer.

Once he was asked, "What kind of things do you write?" he replied, "Whatever they'll pay me for." Of course, we all know that the kind of writing that pays the best is ransom notes, but that tends to lead to short careers and run-on sentences of the penal variety.

He has written, and gotten paid for, fiction, nonfiction, textbooks, online website material, and jokes for comedians. This novel is a short story that just got out of hand.

Now he is living at a slower, more human pace in Indiana - one of the sanest places he has ever known. You should try it sometime. Ask someone to get you some Square Donuts.

His wife, Dawn, is the Pastor at the First Congregational Church of Terre Haute and does her best to keep him from embarrassing himself in public.

Reviews of ...And Pull The Hole In After You by John Kraft

The Fox With A Mean-Left Hook

To really get to know someone you must walk a mile in their shoes. That’s hard when you have no sympathy for criminals, like me! However, after reading this striking book (pun intended), ‘...And Pull The Hole In After You’ by John A. Kraft, a Crime/SuspenseThriller, from WordKraft Press, 2012, this book delivered a winning blow, compelling me to walk a mile with Beverly and Dominic Deltino. This story is about a damsel who, in many ways, acts as her own Princess Charming. In other ways she’s like a helpless attractive fox, and her estranged mob husband, Dominic Deltino, is the primary hound (did I mention that I did not like criminals)! The more reputable hounds come out of their holes later in the book, all with one thing in mind: nab the bad guy or gal. While on the run, Bev falls in love with Davis Lovejoy. Two men plus one woman equals double trouble. The sheer force of this story sweeps you off your feet with an expectation that delivers on its promise.

I think that Beverly is the alter ego of the author’s wife, Dawn (without the criminal connection, of course). John Kraft lived in Hollywood while working as an actor, comedian, voice-over actor and writer. After 25 years he and his wife, Mrs. Dawn Kraft, moved to their own “hole” in Terra Haute, Indiana. Mrs. Kraft serves as a church pastor, but her self-reported main role is to “keep John (Davis Lovejoy) from embarrassing himself in public.” Nonetheless, John’s first novel is no embarrassment. The character dialogue has some initial minor repetitiveness but overall the ethos and pathos of each character will pull you in. You’ll forget you’re reading and feel like you’re watching a movie. One example is the confrontation between Beverly and Dominic. They were arguing over having kids. He was in favor. In a burst of anger Dominic had just slapped Beverly very hard on the side of her head. In retaliation Beverly said she’d rather have an abortion:

“…, I’d do it myself, with a coat hanger. The world doesn’t deserve another you slithering around," she said with a dismissive wave.

She knew how to hurt him worse than any punch she could ever throw.

“I’ve done it before, Dominic, and I’d do it again. I’ve already killed two of your babies.” She could see that she had hit a nerve.

“What?” His eyes grew even wider.

She smiled, seeing him in some real pain.

“Yeah, Dominic, and they were both boys. I had your sons scraped out of me…” She knew that would tear him apart. It wasn’t true, but he didn’t know that.”

Dominic was so infuriated he lunged at Beverly, pinned her down and held her throat in a death grip!

The book’s urgency is palpable! You detect its pulse on the first few pages. There’s a reprieve for pacing’s sake, followed by an increased surge after a member of the Family notices “a vaguely familiar blonde.” Things really take off after a stranger “…grabs the Cherry Garcia ice cream one nanosecond before (Bev) does.” From here you don’t come up for air until all of the hounds have been subdued by words, picks, shovels and guns!

Overall, I give this book, “…And Pull The Hole In After You,” a solid four stars! The soul of this book is likeable from page one! Kraft’s flare for humor flashes into view at appropriate moments throughout the book. His humor had me in stitches quite a few times. Kraft’s reference to the Three Stooges, and the Red Giants were funny and very creative. The main characters, Beverly, Davis, and Dominic, were all believable. The story’s movement and tension create a three-dimensional world right before my mind’s eye. John Kraft is masterful at providing not too much and not too little detail in his scenes. However, at the end you’ll see things from a new perspective and perhaps pause before you label one a fox and the other a hound. Whatever you ultimately conclude, I’m sure you’ll enjoy this read!

You have subscribed to alerts for John Kraft.

You have been added to John Kraft's favorite list.

You can also sign-up to receive email notifications whenever John Kraft releases a new book.