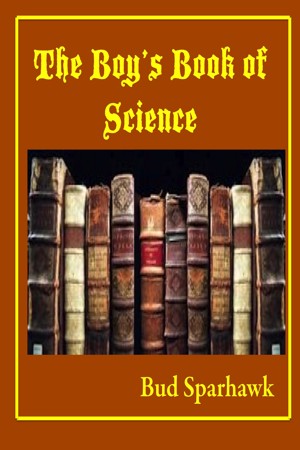 By Bud Sparhawk
This fantasy tale revolves around the strange adventures of an eleven ("almost twelve") year old boy when his grandmother picks out a special book for his birthday. More
Thomas plays an involved game of association and treachery with his two companions at every opportunity. When his birthday nears his grandmother arrives to take him on a shopping trip for the "perfect" gift for a young man.

Thomas is disappointed when she drags him into an old bookstore and presents him with a large, well illustrated book on science. When they leave the store strange occurances begin, which culminate in a dangerous confrontation with forces he never realized existed.

Bud Sparhawk’s novel SHATTERED DREAMS will be released next May at Balticon. His latest novel, DISTANT SEAS is available from Amazon and other booksellers as trade paperback and eBook. A collection of his short stories NONPARALLEL UNIVERSES was recently released. He has a mass market paperback novel: VIXEN and two print collections: SAM BOONE: FRONT TO BACK and DANCING WITH DRAGONS. He has three e-Novels available through Smashwords, Amazon, and other channels. His stories frequently appear in Analog, Asimov’s, and various anthologies.

Bud has been a three-time novella finalist for the Nebula award and has appeared in two Year’s Best anthologies: YEAR’S BEST SF #11 (EOS, ISBN-13:978-0-06-087341-7l, David Harwell-Editor) and The Years Best Science Fiction, Fourteenth Annual Collection, (St Martins Press, Garner Dozois – Editor.) His work was recently published in the BEST OF DEFENDING THE FUTURE and MAN and MACHINE anthologies.

Bud’s short stories have appeared frequently in Analog Fact/Fiction, less so in Asimov’s, as well as in six Defending the Future and other anthologies, publications, and audio books. A complete complete bibliography can be found at: http://budsparhawk.com. Bud also writes an occasional blog on the pain of writing at http://budsparhawk.blogspot.com.

You have subscribed to alerts for Bud Sparhawk.

You have been added to Bud Sparhawk's favorite list.

You can also sign-up to receive email notifications whenever Bud Sparhawk releases a new book.