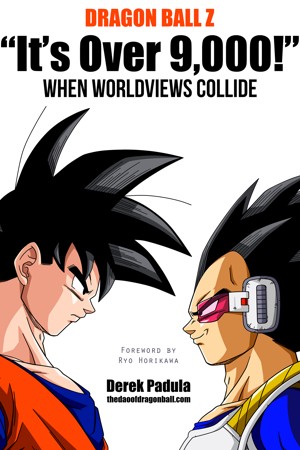 With a foreword by Ryo Horikawa, the Japanese voice of Vegeta, Dragon Ball Z “It’s Over 9,000!” When Worldviews Collide is the first e-book to explain where “It’s Over 9,000!” came from, how the original video spread to receive over 7 million views, and why it continues to be such a popular catchphrase.

Featuring a thoroughly researched analysis of Goku and Vegeta’s colliding worldviews, this e-book helps the reader better understand why conflict is necessary for profound personal growth and character development.

Referencing East Asian belief systems and high tech futuristic paradigms, Derek Padula, the author of The Dao of Dragon Ball book and blog, provides a deeper understanding of this epic story and the inherent values within it.

It will forever change the way we look at Dragon Ball Z.

Derek Padula is the Dragon Ball Scholar. He writes non-fiction books about the culture, history, and fandom of Dragon Ball, the world's most-recognized anime and manga.

Derek has been a fan of Dragon Ball since 1997 when he first watched the anime, and has seen every episode and read every chapter of the manga dozens of times. His love for Dragon Ball inspired him to begin martial arts training in Shaolin Gong Fu, and then Taiji Quan, Qi Gong, San Sau, Shotokan Karate, and Falun Dafa meditation. Derek earned his B.A. in East Asian Studies and a minor in Chinese from Western Michigan University. He studied abroad in Beijing, China where he trained with the Buddhist Shaolin Monks and a Daoist Taiji Sword Master.

He loves to design video games, speak at anime conventions, and wants to share his understanding of this profound series that continues to influence the lives of millions.

You have subscribed to alerts for Derek Padula.

You have been added to Derek Padula's favorite list.

You can also sign-up to receive email notifications whenever Derek Padula releases a new book.