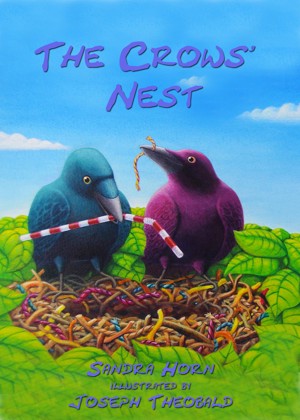 By Sandra Horn
A lively and humorous story by the author of well-loved picture books, such as Tattybogle and Babushka, with colourful illustrations by Joseph Theobald. Handsome Jo and comely Mo want to build a nest, but where? Every time they find a tall 'tree' and start collecting twigs, it all goes wrong!

A gentle exploration of how animals adapt to a changing environment. More
A lively and humorous story by the author of well-loved and award-winning picture books, such as Tattybogle, The Moon Thieves, Babushka and The Mud Maid,with glowing colourful illustrations by Joseph Theobald, writer and illustrator of the very successful Marvin the Sheep series. Handsome crows Jo and Mo want to build a nest, but where? Every time they find a tall 'tree' and start to collect twigs, it all goes wrong!
The Crows' Nest tells the story of the two determined crows, gently exploring how they must adapt to changes in their environment. A wonderfully entertaining way to introduce children to the idea that human activities have an impact on the natural world around us

I’m a children’s author and publisher. I’ve lived in Southampton with my husband Niall for over 40 years, and our three children were all born and raised here in the city. I’ve been writing for children since 2005, when my first picture book, Tattybogle, illustrated by Ken Brown was published (Andersen Press). In 2007 ‘Tattybogle the Musical’ was created by Ruth Kenward of Starshine Music and performed at the Farnham Festival. I have had a wonderful, busy time since then! I have had invitations to visit schools all over the UK and in South Korea. The musical has also led to invitations to visit many schools and to work with the children – great fun and most rewarding. The success of Tattybogle the Musical has led on to further fruitful collaborations with Ruth; Babushka the Musical (book published by Barefoot books) for Christmas 2008 has enjoyed success not only here but in several other countries too. The Moonthieves musical was commissioned for the Farnham Festival 2009 and has also gone world-wide.
My other picture books include the sequel to Tattybogle, The Tattybogle Tree. In 2005 Niall and I set up the Clucket Press and published The Mud Maid and The Giant, both written for the Lost Gardens of Heligan in Cornwall and illustrated by Karen Popham; The Furzey Oak, commissioned for Furzey Gardens in the New Forest and illustrated by Mervyn Hathaway; a new edition of The Moonthieves, illustrated by Esther Connon I Can’t Hear You! I Can’t See you! Illustrated by Muza Ulasowski, and Rory McRory, newly illustrated by Bee Willey. Books in preparation include a new Crows’ Nest illustrated by Jo Theobald, a new Dandelion Wish, illustrated by Louise Crowhurst, Rainbow!(Bee Willey) and Suvi and the Sky Folk (Muza Ulasowski). Some of the new books will be e-books, alongside storybook The Hob and Miss Minkin: tales from an old Sussex farmhouse.

You have subscribed to alerts for Sandra Horn.

You have been added to Sandra Horn's favorite list.

You can also sign-up to receive email notifications whenever Sandra Horn releases a new book.