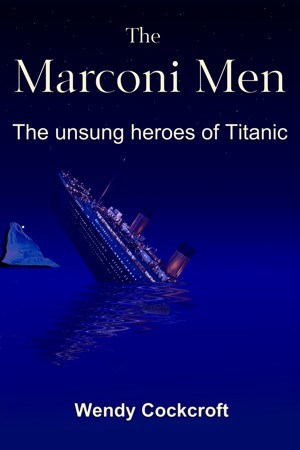 By Wendy Cockcroft
Rated 4.00/5 based on 1 reviews
When the ill-fated cruise ship Titanic set out from Belfast on 2nd April 1912, two young men were aboard to operate the Marconi Wireless set. Jack Phillips and Harold Bride worked in shifts to send telegrams, weather reports, and company messages for the passengers and crew. This is their story. More
Jack Phillips and Harold Bride were the wireless operators on the ill-fated cruise ship Titanic. Working in shifts, they sent company messages, weather reports, and telegrams twenty four hours a day.

Employed by Marconi, they answered to the captain and were considered a frivolous addition rather than the essential staff they would prove to be.

Meanwhile, on Carpathia, their friend Harold Cottam worked alone, snatching sleep when his workload allowed. Captain Arthur Rostron loved technology and marvelled at the "sparks" and their equipment.

Both ships were crewed by experienced men at a time when radio was a new-fangled curiosity and Titanic was the largest object afloat.

This is their story.

Wendy Cockcroft likes to write fantasy, psychological dramas, and horror when she's not blogging about the state of the internet and advocating for social and digital rights.

I'm not sure I would have liked this book as much as I do if it were about a fictional event. Since the Titanic is very real, Ms. Cockroft's account of the events focusing on a few real characters was very well done. The Foreword warns that some parts are fictionalized, but wasn't the movie Titanic exactly the same. Real people died on that ship and a few real people lived to tell about it.

I very much liked the story being based on the telegraph operators (the Marconi men) because historically we know who they were and we also have evidence of the actual messages sent. This lends so much reality to the story, it was quite fascinating.

You have subscribed to alerts for Wendy Cockcroft.

You have been added to Wendy Cockcroft's favorite list.

You can also sign-up to receive email notifications whenever Wendy Cockcroft releases a new book.