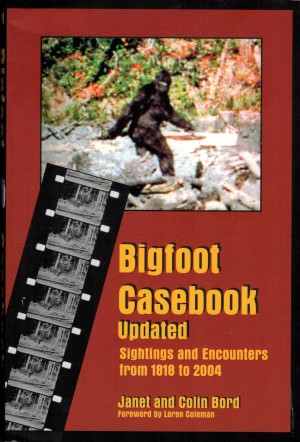 Bigfoot Casebook Updated: Sightings and Encounters from 1818 to 2004

By Janet Bord
& Colin Bord
With pictures and stories the Bords present cases of encounters with Bigfoot. The Bigfoot story has moved from certainty of the creatures’ existence to claims of hoaxes, trickery, and outright lies and back again. Roger Patterson and Bob Gimlin claim to have taken movies of Bigfoot; Ray Wallace’s family shows wooden feet that they claim were used to start the whole Bigfoot story in 1958.

Janet & Colin Bord
During the 1980s the Bords wrote books on a wide range of Fortean topics, including Alien Animals, Bigfoot Casebook, Modern Mysteries of Britain, Modern Mysteries of the World (published in the USA as Unexplained Mysteries of the 20th Century), Life Beyond Planet Earth?, and The World of the Unexplained (showcasing the most interesting photographs in the Fortean Picture Library). In more recent years Janet Bord has written several books including Footprints in Stone: Imprints of Giants, Heroes, Holy People, Devils, Monsters and Supernatural Being, Fairies: Real Encounters with Little People; and The Traveler’s Guide to Fairy Sites, and is currently writing books on the holy wells of Britain and Ireland.

You have subscribed to alerts for Janet Bord.

You have been added to Janet Bord's favorite list.

You can also sign-up to receive email notifications whenever Janet Bord releases a new book.