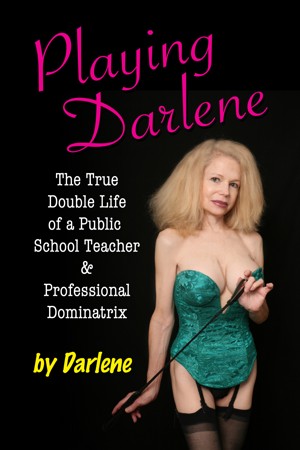 “Playing Darlene” lets the reader take a peek into the mysterious lives of professionals in the sex industry and some of the jaw-dropping encounters she had with the thousands of clients whose fantasies she helped come true. With everything from roleplaying a shopaholic wife being spanked by her husband to wrapping up a muscular cross-dressing client in plastic and watching him wiggle, Darlene helped men realize their most secret desires…while she wasn’t grading school papers on her breaks.

Darlene's true stories of balancing her two different personas are frequently shocking, at times hilarious, and occasionally touching, but at the heart of the story is a woman on a personal journey not only to reconcile with her past, but also to discover the full potential of her own sexuality.

Darlene was born in Hollywood, California, and grew up in Pasadena, a quiet suburb near Los Angeles. She received a BA in German from California State University, Los Angeles.

For several years she worked in television and film. Credits include General Hospital, Chicken Soup for the Soul, and the female lead in the film Monstrosity in which she played a spaced-out punk rocker. She even photo-doubled for Christian Bale in Empire of the Sun and Corey Feldman in Friday the 13th: A New Beginning (when they were 14 and 12 respectively). For the past 20 years, she has been a public school teacher in Los Angeles County.

She currently lives in the San Fernando Valley, where she can be found indulging in her favorite hobby, ballroom and country-western dancing.

Her next book is scheduled to be released in early 2013.

For more information on Darlene, please visit her author webpage at www.chancespress.com.

You may also email her at darlene@chancespress.com.

You have been added to Darlene Dominatrix's favorite list.