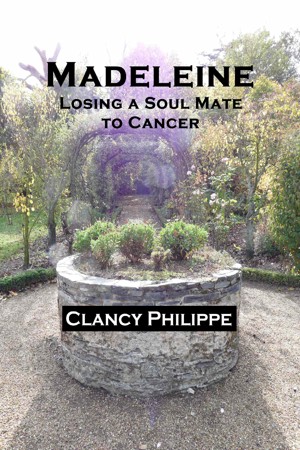 By Clancy Philippe
This book began as a tribute to the author's late wife Madeleine whose five year battle with cancer opened the eyes of many to the tremendous strength and courage drawn from within the human spirit. The loss of his wife, best friend and soul mate left a void in his life that will never be filled. However, in writing this book, he has found clarity from the confusion and a reason to live again. More
This emotional rollercoaster describes the journey of one man losing his lifelong partner to cancer and details how he tries to come to terms with the bereavement and prepares to face life without her. It is an absorbing read, taking you right back to the early days of courtship and romance, and how the young couple married and moved from their native land in Mauritius to set up life in Australia. Cancer appears on the fringe of things with minor effect until Clancy’s wife Madeleine is diagnosed with the disease herself. The couple's courageous ongoing battle over a number of years is detailed along with the emotional highs and lows many families face when dealing with this disease in their midst.

What makes this book stand out above others is that the author has with great openness, honesty and often raw intimate detail poured out his heart as he struggles in his efforts to save his wife from what turns out to be a terminal illness. After her passing, the reader is left feeling the emptiness, the loss and utter despair as if it was their own. The remainder of the story will surprise and provide plenty of food for thought. There are few authors who can in the simplicity of their writing make the words smile through the tears. A beautiful never-ending love story showing great courage from both sides of the divide.

Clancy Philippe, born in Mauritius, graduated at the City University in London in 1970, with a Honours Degree in Civil Engineering. He has since pursued a professional career in Local Government in the United Kingdom, Mauritius and Australia.

He met the love of his life Madeleine in Mauritius and married her on May 2, 1977. They migrated to Australia in 1982 and lived in Sydney in New South Wales, Mildura and Rosedale in country Victoria, and Carrum Downs in Melbourne. Clancy has occupied various high level positions in Local Government Engineering and still practises his profession as a Municipal Engineer with the City of Greater Dandenong in Melbourne.
Madeleine and Clancy jointly took the initiative in 1994, to establish the very first web sites promoting Mauritius and its Cuisine. The 'Mauritius Australia Connection' and 'Recipes from Mauritius' web sites receive in excess of 4500 visits daily.
Both Madeleine and Clancy Philippe have contributed to numerous articles in magazines and travel guides on Mauritian Cuisine. They have travelled Australia extensively and went on a worldwide travel tour in 2007.
On February 11, 2011, Clancy lost Madeleine after a five year battle with breast and ovarian cancers. Other than work, he has since devoted himself to enjoying the love and company of his family, the Mauritius Australia Connection web site and writing about Madeleine and Mauritian Cuisine.

You have subscribed to alerts for Clancy Philippe.

You have been added to Clancy Philippe's favorite list.

You can also sign-up to receive email notifications whenever Clancy Philippe releases a new book.