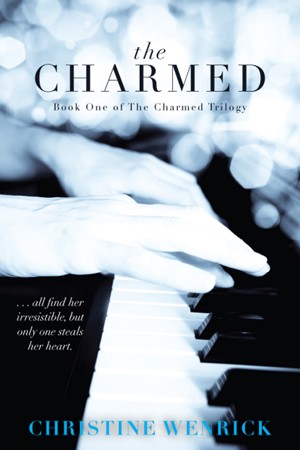 The Charmed: Book One of a Trilogy

"The Charmed" is Christine's debut novel and every page is a true labor of love, reflecting the literary daydreamer she has become. She lives in the scenic Pacific Northwest where she enjoys hiking, camping and photographing many of the wonderful places that served as inspiration for her Charmed Trilogy ... especially on a cold rainy day.

(reviewed 11 months after purchase)
Shannon Patel reviewed on on May 19, 2013

Wow. Just… wow. This book was wonderful! From start to finish, it captured my attention and held me on the edge of my seat until the very end. It’s full of love, mystery, action, betrayal, heart break, excitement and a unique, yet familiar story line that’s sure to please any paranormal romance lover. The characters that the author has introduced in Olivia and Caleb are incredibly likeable with a chemistry that is absolutely undeniable. Olivia’s cultured and innocent demeanor compliments that of Caleb’s chivalrous and protective personality. And when the two of them are together, it just works.

This story is a fantastic start to what promises to be a great series.

Reviewed by Marie for Cocktails and Books

(Source: I received a digital copy of this book for free on a read-to-review basis. Thanks to Christine Wenrick.)
26-year-old Olivia is studying music and about to receive her masters, when she’s in a horrific train crash, and then worse – attacked by vampires!

There are many more surprises in store for Olivia though, and a love for a man (Caden) she could never even have dreamed of, as well as information that changes her view of who she herself really is.
Can Olivia live with who she finds out she really is though? Is Caden’s love for her real? And do they have any hope of a future together?


I really enjoyed this book, and even though it had vampires in it, it wasn’t your typical vampire/paranormal romance, which was a nice change! (None of the ‘Mine’ business either!)

Olivia was a strong and sometimes stubborn lead, and she had no problems pushing to try to get what she wanted, although I expected her to get angrier that Caleb was constantly picking her up and underestimating her. She had had a difficult year surviving both a car crash and a train wreck, and losing all the people that meant something to her. I totally got why she didn’t want to be hurt by Caleb, but how she wanted someone to love her just the same.

The romance between Olivia and Caleb was hot, and Caleb was seriously sexy! Even though there were vampires in this book, the romance element was strong, and I fell for Caleb just the same as Olivia did! There was both suspense and anticipation leading up to the ‘love’ scenes, which made this part of the book very satisfying, and when the scenes eventually came, it felt right!

This book was about vampires. There are a lot of books about vampires around at the moment, and I know a lot of people get a bit sick of it, but I felt that it was really well done in this book. The vampire element didn’t feel overdone, some old ideas were used, but new ideas were used also, and the vampire storyline fitted in well with the rest of the book. We didn’t get any soul-mate business or insta-love either, which was refreshing!

The one thing I didn’t appreciate was the way that Olivia refused to tell Caleb what she was. She felt bad because she thought that she was causing him to feel the way he did, and that he didn’t really feel that way about her, but then didn’t tell him exactly what was going on either. (Gosh that sounds complicated but I’m trying to avoid spoilers!)
This kind of lack of communication most commonly leads to problems in the long run, and I really wished that Olivia could have been honest and told Caleb the truth. (This is more a pet peeve of mine rather than an actual problem with the book though.)

I have to say that this book was very well written and flowed beautifully, I loved the characters and the storyline, and this was a very enjoyable read. I was also very happy with the ending – no cliff-hangers, but plenty to make me want to read the next one!
I would recommend this to anyone who likes paranormal romance! It is a fab read with an explosive finale, and is beautifully written.
8.25 out of 10.

With a fated romance amid a danger-filled world, The Charmed is a story that will resonate with lovers of Adult Paranormal Romance.

The Charmed is a story that I really enjoyed. You have a heroine in Olivia who is a bit innocent, but not completely naive. A bit dramatic in her emotions, but not over-the-top melodramatic. Caleb, her savior and love, was a true romantic hero. He was all man, er, vampire...a manly, protective man who also happens to be a vampire. Their relationship, intense and fast-moving, was very steamy, dramatic, and heart-warming.

The vampire world that author Christine Wenrick built was familiar to other stories in some ways, but managed to have a unique enough spin to make it her own. The bad vampires were scary, the good vampires could be scary when pushed to the limit, but had human-like qualities as well. There are dhampirs, a human/vampire hybrid, who live somewhere in between. There are even vampire hunters, who didn't play a huge part in this book, but I expect a lot more out of in book two. As for Olivia...well, she is something all her own, something unlike I had ever read about before. I'm not going to go into it deeply, because it takes a decent bit of explanation, and it's something better left to the book.

There is one aspect to The Charmed that I think some readers may pick at the love story. Caleb and Olivia's attachment could seem like a case of insta-love to some, but I don't mind it when I can feel the connection strongly. I just felt that I should probably point that out. ;-)

The Charmed was a quite beautiful story. I enjoyed its destined, yet challenged lovers, and the dangerous world they live in. This is a series that I look forward to continuing in book two, The Charmed Souls.

This is such a great book!!! Never a dull moment. can not wait for the next!!!!

Barely eight pages into The Charmed on a windy night and my heart was pumping and I was jumping every time something hit the windows! It's an addictive paranormal romance that doesn't skimp on the paranormal aspect or tone it down in order to bring the romance into the forefront. Both parts of the book are equally strong and equally entertaining.

The Charmed has a strong start and Christine Wenrick is quite talented at making a reader feel like they're a part of the grisly scenes unfolding in the first few chapters. I could not only see what was happening but hear every sound, smell every scent and feel every emotion. It was not always pleasant BUT in my opinion that's what made this book such a strong one. If a story can take me places, I'm happy. If it could make me experience everything, I'm sold.

I have noticed (and feel free to let me know if I'm wrong) that almost every time someone writes a vampire romance in first person there are automatically comparisons to that OTHER vampire series that became a multi-million dollar movie franchise (my guilty pleasure so sue me), and yes, there are a few similarities between Twilight and The Charmed but aside from that, The Charmed is without a doubt, an ADULT book. Trust me, this is an 18 and over read.

Olivia is not a naive teenager with confidence issues. She's a mature woman who has suddenly and violently been thrown into a world she thought only existed in books. Though she finds herself in the middle of a nightmare, she's not completely defenseless. She's as tough as she can be, smart and once she knows what she wants, she doesn't stop until she gets it.

Caleb is unbelievable sexy, and not because of how Olivia describes him, but of what he says to her, how he takes care of her without completely treating her like a helpless female. He's a skilled fighter, who is willing to do whatever it takes to protect Olivia and find out what exactly it is about her that draws not only his interest but that of rival vampires.

The attraction between Caleb and Olivia is pretty intense, which makes the book that much more enjoyable, which was surprising to me because I'm not normally fond of books told in first person. The Charmed is actually the first adult romance novel I've ever read that was told in first person and thankfully, it works. It's dangerous, sexy, and full of surprises. Fans of paranormal romance won't be disappointed with The Charmed, there's enough sexual tension, chemistry and emotional angst that there will be no doubt about to which genre this book belongs to.

Secondary characters are interesting but not too much so that they steal the spotlight from Caleb and Olivia. At times the story was a bit predictable and cliched but almost all romance novels are at some point, it doesn't take away from how enjoyable The Charmed is.

The Charmed by Christine Wenrick is thankfully the first book in a series and according the Christine's website, book two is right around the corner. I cannot wait to revisit this world and its characters again.

(reviewed 15 days after purchase)
Jacinta Cartner reviewed on on Sep. 4, 2012

This book is such a great read, I could not stop reading it cant wait for the next one

(reviewed the day of purchase)
sunita thapa reviewed on on Sep. 2, 2012
(no rating)
oh my god... just the book i need right now... i love lovve love this book..i has been a long time since i have found a book that i want to finish as soon as possible and i am about to this one..so disappointed that i have to wait for i dont know how long for the second book to release... christine wenrick you are a amazing.. and thank you for book..CANNOt wait^^

You have subscribed to alerts for Christine Wenrick.

You have been added to Christine Wenrick's favorite list.

You can also sign-up to receive email notifications whenever Christine Wenrick releases a new book.