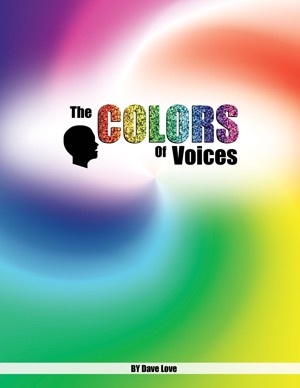 The Colors of Voices

By Dave Love
In 1979, Dave Love lost his sight. This book presents his methods of using sounds and color memory to recognize people and discern moods and personalities. Citing well-documented sources, he explains how individuals perceive visual and auditory information, presenting a rare glimpse into the mental workings of a visually-challenged person, revealing that everyone owns a voice of its own color.

Dave Love hears colors. To him, peoples’ voices can appear red or blue—or any other color in the rainbow—and include tones and hues that help him discern moods and personalities.

Dave is a musician, composer, singer, author, equestrian, and professionally, a music therapist. At the age of seven, he suffered a traumatic brain injury that resulted in loss of his vision, taste, and smell. He realized that he would not be able to pursue art as a career as he had hoped, so he studied piano and guitar, and later joined the marching band at his high school. At eleven years of age, Dave began showing horses and won world championships in Fox Trotting in 1982, 1984, and 1986, competing against sighted riders.

After being mainstreamed in the Parkway public school system in St. Louis, Dave graduated from Missouri Baptist College in 1994 with a degree in Behavioral Sciences. In 2004, he received his Music Therapy degree from Maryville University. Today, Dave works as a music therapist and, in his free time, composes music. He has produced four albums of his original compositions: Beyond A Shadow Of A Doubt, Just To Be Different , It’ s Music To My Ears, and Peace In Pieces. They are available as C Ds. He loves to travel and his excursions have taken him to London, Paris, Canada, the former Soviet Union, Cancun, and the Bahamas. He credits his trip to the Soviet Union in 1992 with inspiring the writing of this book.

“Because I no longer rely on my sight, my hearing has become acute. I am also reliant on my memories from before my accident. These two attributes, hearing and memory, work together to provide the colors I hear in voices.” – Dave Love

To contact Dave or order his CDs and books visit: www.davelovemusic.com

Review
charlene johnson reviewed on Sep. 23, 2010
(no rating)
the colors of voices is writting by dave love my boyfriend, hes a remarkable guy. he shows us that no matter what hard things come your way in life, you keep on going. i have learned alot from this man about life and living.. it is a great book. hope other have the chance to enjoy it like i have.......

You have subscribed to alerts for Dave Love.

You have been added to Dave Love's favorite list.

You can also sign-up to receive email notifications whenever Dave Love releases a new book.