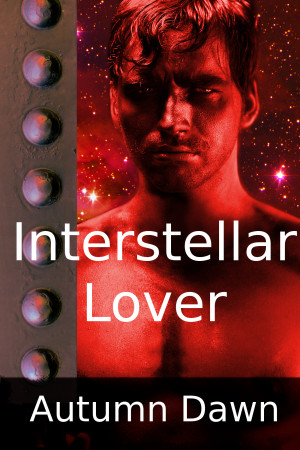 A rocker with more fashion sense than money, Jay thought the geek next door should be kicked to the curb...until she saw him dolled up in black leather. Will the hunk with the silver eyes trust her with his otherworldly identity?

This was a fun book. I was glad when the geeky stuff was over and "Fred" started impressing Jay. What a change in a story when they got to his real life! Enjoyed it.

Interstellar Lover
Stand-alone [to the best of my knowledge]

OK read, futuristic setting. The start was interesting, it seems the heroine lives in an apartment building where most on the apartments are actually portals to other worlds - sort of the alien version of Grand Central Station. She is one of the token Earth humans on site and her apartment is supposed to be alien-free. She's pretty shook up when the slug slimes its way out of her refrigerator and off to a neighboring apartment. It seems her 'normal' neighbors are actually the gatekeepers for their worlds. Fred - the apparent dweeb upstairs - is actually the 'traffic cop' for the area and gets worried when the weirdness escalates and he eventually whisks the heroine back to his world when bad things start to happen.

Jay is stunned when dweeb Fred turns into a leather wearing hottie. In fact she seems more stunned about that than the world he drags her off to - including a bar scene reminiscent of Star Wars, space ships, and finding out her boyfriend is an ex-assassin. Her 'this is so cool!' attitude got a little wearing.

This one wasn't up to the author's usual high standards - it felt like it might have been written a long time ago.

from Amazon:
Nerd gone bad...bad to the bone, that is.

A rocker with more fashion sense than money, Jay thought the geek next door should be kicked to the curb...until she saw him dolled up in black leather. Will the hunk with the silver eyes trust her with his otherworldly identity?