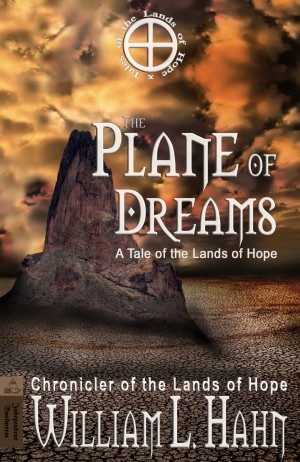 The Plane of Dreams

Rated 4.50/5 based on 2 reviews
The greatest tales begin when the adventure ends. The Tributarians have won fame across the Empire, but also triggered a threat from beyond the bounds of reason to tear the waking world apart. Will newfound wealth sunder their company and remove their last chance? Or will they sacrifice fame and fortune, and risk their lives, to become the unknown saviors of the Lands. More
In the southern empire of Argens just roiled by the rebellion of Yula, a band of adventurers returns from the Shimmering Mindsea bearing enormous treasure and minus one of its members. The Tributarians, unaware of the growing threat to the waking world, embark on separate plans. But the spirit of the hero lives on in all of them, as their good deeds have consequences beyond their original intention. Will it be enough to avert the peril they have unwittingly brought about?

This first novel-length tale set in the Lands of Hope features a complex world and intelligent, dedicated characters whose actions entwine over distances and beyond their own comprehension. Like any world worth living in, the Lands have humor, mystery, horror and action to delight and entertain the reader.

Will Hahn has been in love with heroic tales since age four, when his father read him the Lays of Ancient Rome and the Tales of King Arthur. He taught Ancient-Medieval History for years, but the line between this world and others has always been thin; the far reaches of fantasy, like the distant past, still bring him face to face with people like us, who have choices to make.

Will didn't always make the right choices when he was young. Any stick or vaguely-sticklike object became a sword in his hands, to the great dismay of his five sisters. Everyone survived, in part by virtue of a rule forbidding him from handling umbrellas, ski poles, curtain rods and more.

Will has written about the Lands of Hope since his college days (which by now are also part of ancient history). His first tales include "Three Minutes to Midnight" a slightly-dark sword and sorcery novelette, as well as “The Ring and the Flag” and "Fencing Reputation", the first stories in the ongoing Shards of Light series. The first novel-length tale of Hope, "The Plane of Dreams" was published in September 2012.

Check out other online authors at Independent Bookworm, where you can also find The Maps of Hope, a free resource for readers about the Lands.

Plane of Dreams Trailer
A brief trailer for the first novel-length tale of the Lands of Hope.

Reviews of The Plane of Dreams by William L. Hahn

Like with all other books by Will Hahn, I loved this story. Although there were quite a lot of characters in this (for me usually the main drawback of Epic Fantasy, that's why I hardly ever read this genre), I never got confused or didn't recognize them when they reappeared. I read the story over a lengthy period of time and never had trouble to get back into the story. I loved the dream sequences. They were weird enough to be dreamish and real enough to move the story forward. I found it extremely interesting that I liked the character best who (sort of) dies at the beginning. But that's me. I've always been someone who likes twisted.

I highly recommend this to anyone who likes Epic Fantasy, and I encourage other Fantasy lovers to try some of Will Hahn's shorter stories to see if his style fit's your taste. His stories definitely deserve a big audience.

Classical fantasy for the 21st century.


As a beta reader for Plane of Dreams I haven’t read the polished version and I may not get to it for some time. What I did read was an engaging adventure with memorable characters and a world intricately constructed by Will Hahn. If you are a fan of classical fantasy, Plane of Dreams is your cup of mead. As a reader of much of Mr. Hahn’s work I can safely say this this is his best work to date.

The Tributarians are your standard group of adventurers that you find in fantasy, dwarves, elves, humans, thieves, are a few of the inhabitants from the Lands of Hope. Like most fantasies, the story follows several heroes on divergent paths that culminate in a final battle with the demon Nightmare.

For me, a good story needs good characters more than evil villains or some impossible quest, and Hahn provides some great characters. His style reminds me of T. H. White’s The Once and Future King in both the pacing and humor.
There are passages that I didn’t like and passages that I absolutely loved, and I can say that for every good book I’ve read. What also makes for good fantasy is a three dimensional world that exists beyond the single story and the Lands of Hope has more than enough diversity, history, culture, and fables to satisfy the most ardent of fantasy fans.

While it is a good book to get lost in, it is not without its flaws. The dream sequences can get convoluted, but I’m not one fore dream sequences in any book or movie. Fortunately they are not drawn out or so bizarre that you don’t know what’s going on. Characters from other books pass through or are introduced for future work. This is great for those who read the entire series, but the impact those characters have can be lost on the novice reader. And lastly I found the ending rushed. It is told from several POV’s that I found both entertaining and charming but that made it appear to end too soon.

That aside, The Plane of Dreams also has some of the finest writing I have read in years. One particular storyline completely enraptured me and I hold it up as a shining light to other authors and say, ‘write more of this!’ I highly recommend this novel for fans of this genre.

You have subscribed to alerts for William L. Hahn.

You have been added to William L. Hahn's favorite list.

You can also sign-up to receive email notifications whenever William L. Hahn releases a new book.