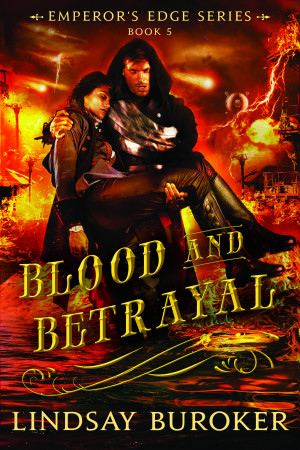 By Lindsay Buroker
Rated 5.00/5 based on 8 reviews
The last thing Maldynado Montichelu—former aristocrat and current ladies' man—ever wanted was to be left in charge. After all, the team just blew up a train, crashed a dirigible, and kidnapped the emperor. It's kind of an important time.

But, with Amaranthe captured by the nefarious Forge coalition, and Sicarius off to find her... More
The last thing Maldynado Montichelu—former aristocrat and current ladies' man—ever wanted was to be left in charge. After all, the team just blew up a train, crashed a dirigible, and kidnapped the emperor. It's kind of an important time.

But, with Amaranthe captured by the nefarious Forge coalition, and Sicarius off to find her, the team is lacking in leaders. Also, Sicarius has made it clear that Maldynado’s life may be forfeit should anything happen to the emperor while he’s gone.

To make matters worse, Forge’s cutthroats are after Sespian, and the young emperor believes Maldynado's loyalties are suspect. As if it’s his fault that his older brother is working with the coalition to usurp the throne. If Maldynado can’t figure out how to earn the emperor’s trust quickly, Sespian will go off to confront their powerful enemies on his own.

Meanwhile, Amaranthe must find a way to escape from the coalition’s newest ally, Master Interrogator Pike, a man who plans to pull all of the secrets from her head, one way or another…

Blood and Betrayal is the fifth novel in The Emperor’s Edge series. If you haven’t read the first one yet, you can pick it up for free.

I'm usually unwilling to spend money on e-books, preferring to go for the free ones- this is the first series I've actually bought. A thoroughly entertaining series with an amazing storyline that stays true to its themes. The characters are well-developed, and there's plenty of action, friendship, loyalty, trust, honour plus a little romance in the background. Best of all, check out the first book in the series for free. Great job Lindsay!

Gosh, this series is getting better and better!
Please keep writing!

Seldom do I find a series I love more and more as it goes on.... this is one that just keeps getting better. The characters are realistic yet fun. Just a hint of romance. Lots of action. It is one of the few books I've bought from multiple sites to get it on all my devices!

Absolutely the best in the series to date. If you like action packed scene, chopped up with believable character banter its a must read. Oh, also there's love to be had. This book is an absolutely perect mix of excitement, loytlty love and friendship.

I have already read this twice and intend to read it many more times before the final book in the series is released.

This book is better than many traditional print book of this type I have read.

Love it, Lindsay, please give us book 6 ASAP!

The fifth installment of Lindsay Buroker's "The Emperor's Edge" novel series is as fast-paced, action-filled and character driven as the previous ones. "Blood and Betrayal" sees a good deal of character development and a holds several crucial moments for the plot, notably a cathartic experience for the main couple and a critical step with the Imperial family conundrum (Note: Amaranthe and Sicarius-shippers do not want to miss any of this!).
However, be warned that some serious dark matters, including violent interrogation, only ever hinted at in previous books are put into the spotlight in this one. Ms. Buroker certainly pulls no punch here. The aftereffects, while shown, are less prominent than I would have liked, given the severity of the experiences described before, making me wonder if they are going to spill over into book 6.
Luckily, "Blood and Betrayal" does not end with a cliffhanger like the previous book "Conspiracy", but it will certainly keep me at the edge of my seat wanting to know what comes next!

Another amazing book in the series--I'm absolutely loving it! Keep 'em coming.

(reviewed 21 days after purchase)
Dean Petty reviewed on Sep. 28, 2012
(no rating)
First let me say that I am amazed that this book was done so soon after book #4. I have enjoyed each book in this series and will be one of those waiting for her next books to be released. I am still impressed that Lindsay has such unique characters in the books, each one is individual and unique. I would highly suggest this series for anyone who likes character driven stories, I count myself lucky that I stumbled across this great author.

I also want to thank Lindsay for staying as a self-publising auther. I know that this may not get the larger crowd, however, I beleive you should get more for the work then what Amazon would offer; or any other publisher for that matter. Those of us out there thinking of self-publishing hold those like you as beacons of hope.

EXCELLENT! I really don't have words to express how much I enjoy all of Lindsay Buroker's books, not just the Emperors Edge series, but all her books. I've read all that I could find and thoroughly enjoyed each and every one. Thank you Lindsay.

Another great entry for fans of The Emperor's Edge series. After leaving us on a cliff-hanger, Ms. Buroker plunges us directly into the action, with the team in danger . Told from Amaranthe's and Maldynaldo's points of view, this book is darker than earlier entries, but that's balanced against a greater sense of urgency in their mission. The team has picked up two extra members--Sergeant Yara and Emperor Sespian himself--but lost their intrepid leader Amaranthe. Faced with conflicting priorities (help the emperor or find the boss), the team splits up. This allows for some interesting character growth among the secondary characters, Yara in particular, adding depth to the story and the already colorful cast of main characters.

Mal's point of view is particularly intriguing. After seeing him as just a pretty face in earlier books, his interior monologue is surprisingly soulful and tragic as we find out more about his past, and why he was disowned. Being Mal, however, he also manages to get the team into hot water on more than one occasion, while attempting to win the trust of Emperor Sespian...often to very entertaining (and disastrous) results.

Amaranthe's side of the story uncovers many secrets from the mysterious Forge coalition. It also tests her mettle and her loyalty to Sicarius.

All in all, Blood and Betrayal is a very satisfying read. If you love steampunk, fantasy, kickass heroines or a good steamboat crash, this is a definite recommend.