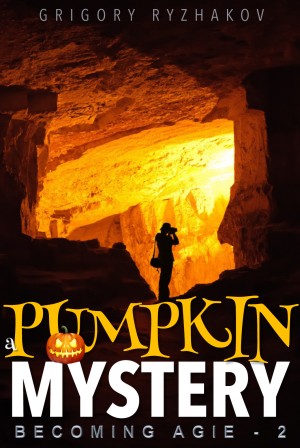 Being curious can get you into trouble especially if it’s about the most unusual woman you have ever met.
She is a fighter (and a molecular biologist).
When a vast cavern beneath Slown City is discovered she dives into a life-endangering adventure to solve the mystery of a missing pumpkin. Can she succeed where others failed?
Available ebook formats: epub mobi pdf rtf lrf pdb txt html
First 25% Sample: epub mobi (Kindle) lrf more Online Reader
pdb
Price: $0.99 USD
Buy Add to Library Give as a Gift
How gifting works
Create Widget
Tags: romance love mystery action lgbt underground
About Grigory Ryzhakov

Grigory (a.k.a Grisha) Ryzhakov grew up in the Russian Far East, bathing in the icy waters of Seas of Okhotsk and Japan and playing hide-and-seek in the snowdrifts that carpeted his native town of Korsakov.

He later travelled thousands of miles to vibrant London, on the way collecting his MSc degree in biochemistry at Moscow State and PhD in molecular biology at Cambridge University.
Meanwhile, Grigory has been ceaselessly creating poems, songs and prose until eventually he wrote his debut novel "Mr Right & Mr Wrong".

"Usher Syndrome" was his first published story, also adapted for the stage and performed at London's Barons Court Theatre in 2010.
To connect with Grigory, please visit his blog: http://www.ryzhakov.co.uk

You can also find him on Twitter/Facebook - @GrigoryRyzhakov
His songs are available on SoundCloud - http://soundcloud.com/grishamcarrow

You have subscribed to alerts for Grigory Ryzhakov.

You have been added to Grigory Ryzhakov's favorite list.

You can also sign-up to receive email notifications whenever Grigory Ryzhakov releases a new book.