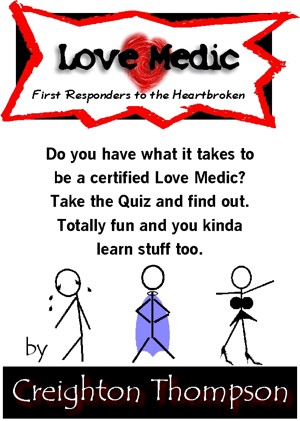 By Creighton Thompson
Do you have what it takes to counsel the newly broken hearted? Take the ten question quiz and become a certified Love Medic. Answer the extra bonus questions and be Super Certified. And as a bonus-bonus get a first look at Creighton Thompson's new "Good to Know" series. Total fun as you kinda learn stuff too.

Creighton Thompson has read a handful of books halfway through, and only one book all the way through because there was no movie or television show to help him with the book report. Over twenty years, he’s held and been dumped from nearly every position in local radio, and now clings to traffic reporting as his final stop in this medium.
Thompson created a radio entertainment service called "Nice Bits," in which he wrote, performed, and produced humorous bits for morning shows across the country.
Thompson continues to write and produce radio commentaries in between telling people where to go on the wild streets of Phoenix. He currently lives in Peoria, Arizona with his wife, daughter, and dog but hopes to raise enough money from his first book to buy a really cool Corvette so he can go to his next reunion in style.

You have subscribed to alerts for Creighton Thompson.

You have been added to Creighton Thompson's favorite list.

You can also sign-up to receive email notifications whenever Creighton Thompson releases a new book.