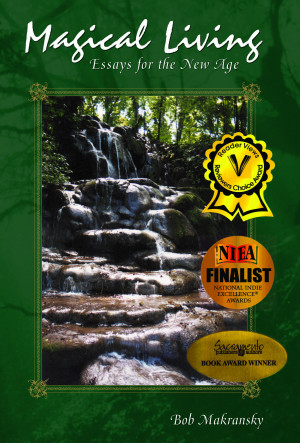 There are three paths to the Spirit: control over the body (e.g. hatha yoga); control over the mind (e.g. insight meditation); and control over the emotions. The practice of magic aims at control of the emotions: its goal is to arrive at a place where you are perfectly content and at ease in the now moment – neither angry about the past nor fearful of the future. When the emotions have calmed down, the body and mind naturally relax as well. Magical Living is written to show intelligent, thoughtful people who live in a workaday world how to understand and spiritualize their lives without radically altering their lifestyles.

– “I love this little book! ... Carry this book with you, read and reread the essays, and connect with joy. ” – Kathryn Lanier, InnerChange magazine

– “I could not get enough! I actually read some of the essays 2 to 3 times and discovered new insights each time. ... Magical Living by Bob Makransky is an easy to read little book with a lot of surprises. I am positive that it will enrich different people’s own spiritual journeys in unexpected ways and help readers to consider opening their minds and hearts and begin a relationship with what surrounds them in the present moment. A great book to revisit more than once!” – Susan Violante, Reader Views

– “If learning how to live magically appeals to you, you’ll love this book. Bob Makransky is a well-known astrologer and teacher of psychic techniques such as channeling, regressions, and working with nature spirits. In Magical Living, he shares how to communicate with spirit guides, communicate with plants and work with nature spirits, how to manage love relationships, change your luck and more. This is not only an interesting book with some different ideas, it’s also a fun book that can be used to lighten the readers’ hearts, minds, and spirits.” – Krysta Gibson, New Spirit Journal

– “It’s a beautiful little book to carry around for when you just want something to read at odd moments, but I suspect that, for some, it will be a book that’s picked up over and over again. At times, I find myself ruminating over something I read or glance at the contents page to have something jump out at me that’s relevant to the moment. I highly recommend this book to anyone with an open mind and a real willingness to look at themselves and their surroundings.” – J Byrne, Psychic-Magic magazine
Available ebook formats: epub mobi lrf pdb html
First 10% Sample: epub mobi (Kindle) lrf more Online Reader
pdb
Price: $9.99 USD
Buy Add to Library Give as a Gift
How gifting works
Create Widget
Tags: angels spirituality channeling new age relationships magic paganism witchcraft pagan mysticism self healing gaia mind body spirit magick occultism earth magic spirit guides nature spirits love relationships earth energy bob makransky makransky self transformation spiritual cookery spiritual gardening white witchcraft childraising spirit possession
About Bob Makransky

Bob Makransky is a systems analyst, computer programmer, and professional astrologer. For the past 35 years he has lived on a farm in highland Guatemala, where he is a Mayan priest and is head of the local blueberry growers’ association.

Bob became interested in magic at Micky Russo’s Spiritualist Church in San Francisco in the 60’s, but it wasn’t until twenty years later that he began channeling spirits himself. He moved to Guatemala in the early 70’s and started a farm which operates on principles akin to Rudolf Steiner’s Biodynamics, but with a Mayan slant. He became involved with local Mayan priests because of Mayan calendar software he had written, which they had all adopted; and he was given a ritual to invoke Mayan spirits himself. He studied Mayan astrology and performed ceremonies with his teacher, Don Abel Yat Saquib, until Don Abel's death in 2009.
>>>>>>>>>>>>>>>>>>>>>>>>>>

You are the people,
You are this season’s people –
There are no other people this season.
If you blow it, it’s blown.
– Stephen Gaskin

I. The human race is in imminent danger of self-destructing and dragging our mother earth down with it.

II. There will be no miraculous salvation due to Mayan prophecies; or Jesus’ or the Mahdi’s return; much less from the irresponsible governments, corporations, media, and academics who got us into this mess in the first place.

III. The theory of probable realities states that each individual person decides the fate of the entire universe. If you truly choose to save the world, you will wind up in a probable reality in which the world is saved.

IV. The only chance for survival – not to mention prosperity – is for each individual to reject society’s mutual suicide pact and make saving the earth and future generations their NUMBER 1 PRIORITY (as opposed to something they may get around to someday). This is the magician’s equivalent of the Bodhisattva’s oath.

V. Rejecting social conditioning means eradicating all trace of self-pity. Only by clear, sober, objective thinking (not unquestioning adherence to beliefs) can each individual save him/herself and the earth.

VI. This type of thinking is based upon what each person’s heart tells them. It is different for everybody; and everybody has to find their own answers for themselves by examining their own habitual thoughts, moods, and concerns minutely. To do this magicians use various techniques, including:
a) techniques of self-analysis such as Active Imagination and Recapitulation.
b) techniques of transformation such as resorting to tree spirits and the earth.
c) techniques of hopefulness such as Creative Visualization.

VII. Detaching from society’s conditioning of self-pity necessarily implies taking complete responsibility for oneself rather than wallowing in helplessness or daydreaming. To do this magicians:
a) channel their own spirit guides themselves for information and advice;
b) go to nature spirits for validation rather than seek the approval of other people or society;
c) become as self-sufficient and frugal as possible, including growing at least some of their own food and reducing their needs to the bare minimum.

VIII. The goal of magic is to make everyday life more dreamlike; to be able to feel comfortable in situations beyond one’s control. Feeling relaxed and in good shape even in the midst of a maelstrom is called “enlightenment”. Enlightenment doesn’t mean light as opposed to dark; but rather light as opposed to heavy.

It’s a platitude these days to begin a glowing review with the words: ‘if you only buy one book on (subject) this year, then make it this one ...’ I could have adopted this phrase myself, but then I’d have had to urge you to buy all four. Here is why: if you’re the kind of reader who found the touchy-feely, scholarly-lite magic of Rhonda Byrne (of The Secret fame) somewhat lacking in substance, not to say conviction, you really need to check out the work of Bob Makransky. This, as it says of a certain famous soft-drink, is the Real Thing.
In this series, not only do we get an author who knows his subject inside out, but also a directness of approach not often seen in works of this kind. Not for Makransky the wishy-washy approach that attempts to soothe and reassure the reader with false promises of magical success - something about which many customer complaints arise on the Amazon website - but, rather, an honest and uncompromising study of what Magic really entails.
Let it be said, very firmly too, that Makransky possesses an astounding knowledge of occult tradition and what we can expect when we work with the inner planes. He has an engaging writing style, too, and this makes him the perfect companion for your magical journey, whatever your level of experience. So, if you are the kind of reader who appreciates the value of sagacity, passion, years of real experience and a lovely down-to-earth approach, these four books most definitely deserve a place on your bookshelf.

James Lynn Page (author of Celtic Magic, Everyday Tarot and The Christ Enigma: The Jesus Myth and the Gospel Code.)

Also in Series: Introduction to Magic

You have subscribed to alerts for Bob Makransky.

You have been added to Bob Makransky's favorite list.

You can also sign-up to receive email notifications whenever Bob Makransky releases a new book.