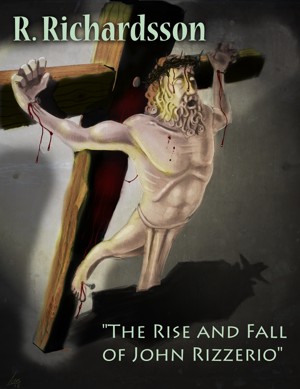 The Rise and Fall of John Rizzerio

As a looming evil from the past threatens to destroy everything he's ever known, John Rizzerio must battle not only the threat before him, but the threat within him as well. Will be be strong enough to face that which stands before him? Or will his growing self doubt drag him down? More
It started with a single phone call. I had been been passing through town, with no intentions of staying, when 'He' called. While I had never heard his voice, I knew that the voice belonged to the Dark Prince himself; Vlad Tepes III, Dracula!

He has her! I so desperately wanted to charge to her rescue but I knew that I alone would not have the strength. I would have to draw from all of my resources if I was going to stand against 'him' or 'his' children!

I pray to God that I have the strength to face 'him'. I just don't know if that's going to be enough...

Join J.R. as he and his friends scramble to rescue his family from the clutches of evil.

Over the course of two separate weeks, each twenty years apart, John is forced into battle against creatures he lacks the strength to defeat.

Together, will he and his friends have what it takes to rescue his loved ones? Or will his growing self doubt bring his party down?

When faith is no more, one can only hope. But, hope is tough to hold onto when his own holy artifact, a Cross handed down to him by his grandfather, becomes twisted in a reflection of his own inner torment.
Available ebook formats: epub mobi pdf rtf lrf pdb txt html
Price: $0.99 USD
Buy Add to Library Give as a Gift
How gifting works
Create Widget
Tags: fiction vampire horror vampire hunter vampire action john rizzerio
About R. Richardsson

R. Richardsson began writing in the early nineties, but it wouldn't be until 2012 when he would complete and publish his first book; ‘The Rise and Fall of John Rizzerio’, Book 1 of the ‘Ballad of John Rizzerio’ trilogy.

When not working at his part time job, he spends his days off working on his current project, as well as with his social media sites. A like for his author page on facebook, or a follow on twitter is the best way to keep up with what he is currently working on.

Any of his remaining time is spent with his wife and four children, though he hopes to one day be able to sustain his family on his writing alone.

The Rise and Fall of John Rizzerio
Book Trailer

Reviews of The Rise and Fall of John Rizzerio by R. Richardsson

You have subscribed to alerts for R. Richardsson.

You have been added to R. Richardsson's favorite list.

You can also sign-up to receive email notifications whenever R. Richardsson releases a new book.