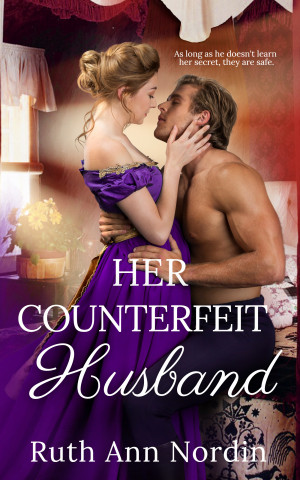 Rated 4.00/5 based on 3 reviews
In an act of desperation, the Duchess of Watkins and the butler bury her dead husband in secret. On their way back to the manor, they find a stranger who has been beaten and left for dead. And he looks just like her husband. Dare they replace her husband with a counterfeit? And if they do, what consequences will come as a result of their lie? More
A conspiring duchess. An amnesiac doppelgänger. Can hearts be true in the midst of double deception?

Anna feels little anguish when she sees the dead body of her husband. The young widow has no plans to mourn over the cruel Duke of Watkins, but she knows that his untimely death will put her at the mercy of his malicious younger brother. With help from her loyal butler, Anna smuggles away the body in the dead of night…

Anna hopes to keep her husband’s death a secret until she’s settled far from the reach of her spiteful brother-in-law. When she stumbles upon an unconscious, wounded man who bears an uncanny resemblance to the Duke, she wonders if she’s found the solution to all their problems. The stranger wakes up with no memories of his life, and Anna wastes no time convincing him of the lie…

As her husband’s doppelgänger begins to treat her like true royalty, Anna succumbs to his affections. Just when she thinks the charade is in the clear, the truth bubbles to the surface. Can Anna convince the amnesiac of her love before losing her husband a second time?

Reviews of Her Counterfeit Husband by Ruth Ann Nordin

Cliche driven not a traditional regency

Her Counterfeit Husband by Ruth Ann Nordin
Anna, Duchess of Watkins has a problem. Her husband of six years is dying. Since he's cruel that might be good...only it could get worse. If he dies his brother, Lord Mason, will inherit the title and with the way he leers at her, it's hard to know which is the worst evil. Fortunately between her faithful butler, Appleton, and herself a plan is formed when her husband dies. And the plan gets even better when they happen to find her husband’s look alike and he has no memory but the one Anna and Appleton give him.

Jason Merrill, the Duke of Watkins. That is who he woke up believing he was. Not that he enjoyed any of his past indulgences such as drinking, gambling and women. He even has a great fear of the horse he once enjoyed riding. No, now he is softer and only enjoys being with his beautiful wife, Anna. But is he really who he believes he is? Or is he someone completely different who’s been tricked and if so, why?

Ruth's jump from the wild west to historical England has been quite a success. Her first book is The Earl’s Inconvenient Wife and she brings a few characters from that book into this one in passing but this story is mostly about Anna, ‘Jason’ and his brother, Mason. Once again we see how keeping the truth from someone you love always comes back to bite you in the arse!
**Sexual situations within marriage
http://justjudysjumbles.blogspot.com/2011/09/ruth-ann-nordin.html#