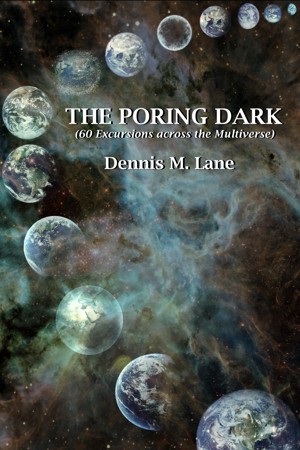 By Dennis M Lane
A collection of 60 tales set on various worlds of the multiverse (12 short stories, 24 SF poems, 24 flash fictions). In which Dennis M. Lane looks at what it means to be human in a variety of settings. A new collection with some works previously having been seen in "Star*Line", "Itch", "Probe" and "Eye to the Telescope" and heard on "StarShipSofa" and "Tales To Terrify" More
UPDATE: Two of the poems contained in this collection ("Grandfather" and "Blind Obedience") have received nominations for the 2013 Rhysling Awards!

If you could choose a new body, what would it be?

In a world where Hitler got the atom bomb, what would you change?

If everyone was telling you to stay at home, would you?

When crossing the road means death, how would you find food?

When the stew that you’re eating seems strange, dare you ask what’s in it?

When every camera is watching you, how do you get some privacy?

After paying your debt to society, why can’t they just let you die?

When the last soldier is leaving, should you give up your child to his care?

The multiverse branches; each new bubble pregnant with possibility, but, for all the differences, one thing remains constant; there are always decisions to be made...

Dennis M Lane was born in the monochrome days of the early sixties, deep in the industrial heartland of England. Coming of age during the Thatcher Years, the conflict that he experienced during the Steel Strike and the Teacher’s Strike played a great part in his political development.

In 1986 he travelled to Nigeria as a volunteer teacher and this lead to a long career working in international development, which continues to this day.

He has lived in 7 countries across Africa, the Caribbean and the Pacific, each country making its own impact upon him. He has finally settled in South Africa where he has now lived for 8 years.

His writing ranges from poetry, which covers a variety of themes from the personal to the political, and are written in a range of styles and forms; through short stories; to longer forms.

His first book was "8 Million Stories", a collection of general poetry, and was published in 2010. His second book "The Poring Dark", a science fiction collection of short stories, poems and flash fiction, was published in September 2012 (two of the poems being nominated for the 2013 Rhysling Award). His third book (and first novel) “Talatu”, is a Young Adult Science Fiction tale and draws on elements of his experience in Nigeria. It was published in March 2013.

He is currently completing his second novel "The King's Jewel" the first of "The Helix Key Series" which is a Young Adult series best described as Quantum Leap meets Assassin's Creed with a backbone of Stargate; and is populated by his own ancestors (going back as far as the time of Christ!)

Reviews of The Poring Dark by Dennis M Lane

You have subscribed to Smashwords Alerts new release notifications for Dennis M Lane.

You have been added to Dennis M Lane's favorite list.

You can also sign-up to receive email notifications whenever Dennis M Lane releases a new book.