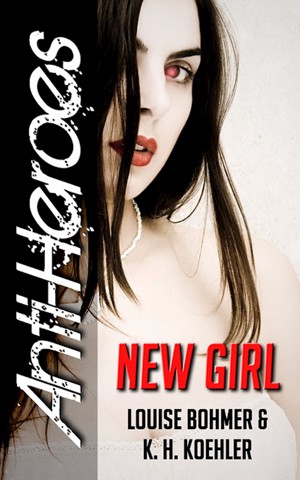 By Louise Bohmer
Rated 2.00/5 based on 1 review
Get Ready to Root for the Villain...

Serena is the new girl in a school that caters to not just "Norms," but the sons and daughters of the world's greatest Superheroes. The problem? She's the daughter of the Night Witch, a cardinal member of the League of Extreme Evil. She'd love to join the other super teens and prove she isn't the villain that her mother was, but... More
New Girl (Anti-Heroes Book I) by Louise Bohmer & K.H. Koehler

Get Ready to Root for the Villain...

Serena is the new girl in a school that caters to not just "Norms," but the sons and daughters of the world's greatest Superheroes. The problem? She's the daughter of the Night Witch, a cardinal member of the League of Extreme Evil. She'd love to join the other super teens and prove she isn't the villain that her mother was, but it isn't long before she falls in with a group of Supervillains that the school calls the Geek Squad, which includes a biochemically created vampire named Nikki, a genetically altered jock named Isaac, and Jinx, the son of Satan himself!

She's immediately attracted to Jinx, but Serena has vowed to do what's right. But there are secrets buried deep within Serena's past that threaten to kill her, and even rock the foundation of Earth itself! An evil decay is reaching out from a distant star, and the Supers and Geeks will need to work together in order to defeat it--if they can keep from killing each other. The Supers thought the greatest battle for control of Earth had been fought and won, but a cosmic war is coming, and it isn't long before it's difficult to tell the difference between hero and villain.

Louise Bohmer has over eight years experience in editing and publishing. She edits for Permuted Press, and has edited for many publishers and authors in a variety of genres including general interest, romance, erotica, mystery, horror, and speculative. Her writing experience extends across fiction, ghost writing, ad copy, web content, SEO copy, and press releases. Her latest release is the Anti-Heroes serial written with K.H. Koehler (Anti-Heroes Press) and you can read her short fiction in Detritus (Omnium Gatherum), The Red Penny Papers, and Old School. Plus her debut novel, The Black Act, is now available once again in serial form. She offers freelance services in editing, book cover design, ghost writing, and ebook as well as print formatting. She loves to hear from her readers via email and reviews. Her home base is New Brunswick, Canada, where she lives with a tattooed giant. You can pay her a visit at http://www.louisebohmer.com or email her at blackfaery76@yahoo.ca

Reviews of New Girl (Anti-Heroes Book I) by Louise Bohmer

Let me first state that I bought the other two books in this series because I actually really like the concept of this "book". If I had not thought there were merits to it, I wouldn't have done so, specially since this "book" was free on Smashwords. So yes, the series is worth spending money on if you like the premise.

However, there is a lot that is wrong with this story. First off, it refers to itself as a book, which is far from the truth. At a 26 pages long, it is a short story at best. Combine that with no real climax within the story, no real climbing action, by the end of those 26 words it's hard to feel satisfied.

The story itself feels as if it was written by 16 year old goths trying to write something dark and edgy. This superhero book actually reads far more like a paranormal one. Yes, there are super-beings in the story, but they play such a small roll to the vampires, witches, Satan, etc, that they are easily forgotten and easily could have been replaced with other paranormal beings and not lose anything.

Another issue with this story is the plot holes. You have a high school in a city with the largest amount of super heroes, with a super hero on staff, and yet they have no way of dealing with a super powered fight breaking out in their lunch room. Then, there's the fact that the teachers have no idea what is going on within the student body. Every teacher I have known is not blind to the interplay of power within their classrooms. A group of students would not be labelled as bad when it is extremely clear who the 'assholes' are within the school.

Finally, the Geek Squad walks out of the police station after being there for a murder investigation, and Jinx actually says he'll see the others at school the next day. I'm sorry, but you just fled a murder investigation, incapacitated the entire police force, and still expects that he will be able to return to the scene of the murder and everything will be okay. Hell, he tells his friends basically that it is okay that they return to school, despite being suspected accessories to murder themselves. Not to mention a firing pistol in public that NO ONE goes to investigate. And one would thing that if super powers are being used to destroy a school in a city full of Supers, someone, anyone, would have shown up to investigate.

Now the characters are interesting, unique, and there are things tied in with them that grab the reader. Take the mention of the 'Witch World'. The mere mention of it and their technology instantly creates a want to read more and discover more about that world. Little things like this are spread throughout the story and the writers did a good job placing them to hook the reader. Hopefully later on there will be payoff for these little hooks.

The characters themselves are interesting. The main character (I assume it's Serena since Jinx gets the same amount of POV time within the story) is fairly eye catching and realistic. Her fears, her reactions, they all seem genuine and fit her character. I do have a bit of an issue with Jinx being what he is, mostly because it feels very Mary Sue-esk. Why is it when someone is the son of something evil, it's always the Devil? (who's actions in the story also seem cartoonish and out of character for the lord of all evil. Even for a YA story, he's very G rated.) I can understand his want of a parent and his fear of abandonment, however against the backdrop of his cartoonish father it quickly loses its impact and any sympathy that may have been forming.

In the end, I loved the concept, but the lack of structure and the plot holes just wrecked this for me. I will continue to read the other "books" in this series as I do enjoy the characters. However, I really hope that the other two that are currently are released have climaxes and actual plot building that is fulfilled.

So if you are looking for a well written super-hero story, this isn't for you. However, if you want a quick read with interesting characters and great potential later on, then maybe give this story a try. I'm definitely hoping for things to blossom in the books ahead.

You have subscribed to alerts for Louise Bohmer.

You have been added to Louise Bohmer's favorite list.

You can also sign-up to receive email notifications whenever Louise Bohmer releases a new book.