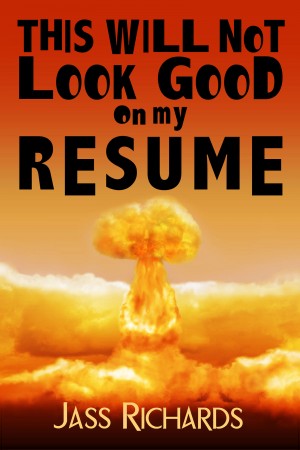 This Will Not Look Good on My Resume

By Jass Richards
Rated 2.86/5 based on 7 reviews
Everyone gets fired at least once in their life. And if not, well, they’re just not trying very hard. And we all think of brilliant and immature 'shoulda saids' and 'shoulda dones' for weeks after. (Okay, years.)

A quirky bit of fun that slaps you upside the head.

“Ya made me snort root beer out my nose!” Moriah Jovan, The Proviso.
“Sharp and pointy.” Peg Tittle, What If...

Jass Richards (jassrichards.com) has a Master’s degree in Philosophy and for a (very) brief time was a stand-up comic (now she’s more of a sprawled-on-the-couch comic). Despite these attributes, she has received four Ontario Arts Council grants.

In addition to her Rev and Dylan series (The Road Trip Dialogues, The Blasphemy Tour, License to Do That, and The ReGender App), which has reportedly made at least one person snort root beer out her nose, she has written This Will Not Look Good on My Resume (‘nuff said), followed by its sequel Dogs Just Wanna Have Fun (ditto). She has also written the perfect cottage-warming gift, TurboJetslams: Proof #29 of the Non-Existence of God and a (way)-off-the-beaten-path first contact story, A Philosopher, A Psychologist, and an Extraterrestrial Walk into a Chocolate Bar.

Excerpts from her several books have appeared in The Cynic Online Magazine, in Contemporary Monologues for Young Women (vol.3) and 222 More Comedy Monologues, and on Erma Bombeck’s humor website. Her one-woman play Substitute Teacher from Hell received its premiere performance by Ghost Monkey Productions in Winnipeg.

Her worst-ever stand-up moment occurred in Atlanta at a for-blacks-only club (apparently). Her best-ever stand-up moment occurred in Toronto when she made the black guy fall off his stool because he was laughing so hard at her Donovan Bailey joke (the guy set a world record for running the 100M in 9.84 seconds, yeah? Big wup. My dog can do better than that. 'Course, she's black too).

First, let me just say I was glad I was not drinking anything while reading this. I refrained from that. My husband said he never heard me laugh so much from reading a book. At one point, I was literally in tears.
Jass Richards is brilliant with the snappy comebacks and the unending fountain of information she can spout forth. And I do mean that quite literally… the spouting part.
Jass takes you from job to job, from the psych halfway house, where her absolute sense of logic helps more patients than the people trained to work there, to the maintenance of a summer camp, where the woman weaves in and out of the kids, dancing, saying, “I don’t have to deal with you! I don’t have to deal with you!”
The quick wit, the sharp tongue, the acid words and sarcasm that literally oozes from her pores… beautiful. I laughed so hard I cried in some places. I do admit, there were a few parts where I got just a little lost, (sort of like when she traveled in Europe) but quickly regained my bearings as I read on.
Would I recommend this book? Do dogs have squeaky mice and bright green tennis balls? Yes. Yes they do. So yes, I would definitely tell you to read this book if you want a fun romp, a good laugh and a couple of pointers on how to get let go of a job you can no longer stand. You can get fired with style.

I think this could have been a good book. I couldn't even finish it though. The jokes in this book are often cruel, and the woman who is the "narrator" is a jerk. There were a few things in there that I laughed at, but the majority of it was just obnoxious. By the second chapter, I understood the idea "Men=sexist pigs and women=the superior race". There were only so many times in the few chapters I read that I could stomach the whole concept. I was really looking forward to reading the book. From the synopsis, I thought this would be a hilarious light read. It turned into a woman's rant. The book simply became monotonous and definitely NOT FUNNY . I don't think I need to read any further to see how many more ways she can fit in how stupid, shallow, slow witted, sexist, and piggish men can be

(reviewed 7 months after purchase)
Lilac Wolf reviewed on May 28, 2011

This book really made me laugh when I started it. I mean really laugh. It is a funny, sharp and witty story. However I eventually started getting tired of the heavy feminist angle. Constantly putting down men and also going further and putting down children and women who have them. Still it was full of very funny parts.

This book is loaded with jokes and even a good point here and there. I really liked the point when she was working with mental patients. Why do they put mentally disabled with mentally disturbed patients, it's like making "Corky room with Hitler."

Mostly I enjoyed it, I think it's a book to be savored slowly, it's always on...always moving...always funny. I think I just got burnt. I'm not done with it yet, but I am not going to delete. I will pick it up when I need a laugh.

I laughed a lot but could not believe how mean she was. felt quilty for laughing at the meaness. lots of different jobs and situations. can laugh at self and others. well written and enertaining. was given ebook to read and review.

I just loved this book by Jass Richards. It was a quick read, and left me in stitches. What a great way to escape from one's hectic life.

A great read for anyone looking to laugh after they either lost a job or got fied from a job.

Wow. This book was great. Brett Laramie has just about every job you can think of...and she's been fired from just as many.
The way this book is done, you really feel like you are there, or...at least a the bar hearing all the juicy details!
Wonderful read, funny, sarcastic. Loved it!

Have you ever held a job? Maybe two, three, four, seventeen? Ever been fired from a job for speaking your piece? Or have you ever wished you could say whatever came to mind, no matter the consequence? If so, you'll love this chance to live vicariously through Brett Laramie as she plows her way through a series of jobs, leaving nothing unsaid, but many things undone. From teaching to waitressing, from manning a phone for a crisis hotline to applying to be a firefighter, she's done it all, seen it all, and said it all. And she takes us along for the ride!

Jass Richards, a comic writer, has created in Brett a strong-willed woman who alternates between ranting manifestos and (persistently) asking the questions we all want to ask. This book is like a roller coaster ride on a stream of consciousness. The writing style very much reflects a speaking style rather than a written narrative, which fits the characterization of the novel rather well. Each chapter reflects one (short-lived) job experience in Brett's wide variety of careers. Anyone who's ever had a job will easily relate to one or more of the experiences in this story. I certainly found a few that hit home for me. Brett easily says things we all wish we could say, and sometimes says things we wouldn't have ever thought to say. At times, this story had me laughing out loud as I recognized myself (or others), but at other times, the ranting went from lighthearted fun to serious missive, leaving me a little cold. There were some very pointed jabs at certain "institutions" (for lack of a better all-encompassing term), such as religion and misogynists. Hilarious at first, but got a little old and just plain bitter-sounding after a while. For the most part, the story flowed along quickly and somewhat hysterically, but some parts seemed more drawn-out, leaving me ready for a change in scenery. Luckily, I never had to wait long for a new chapter, and I was soon delving into a totally different experience.

Altogether, a funny, quirky read, good for anyone who is up for a quick escape into someone else's hilarious misery.

You have subscribed to alerts for Jass Richards.

You have been added to Jass Richards's favorite list.

You can also sign-up to receive email notifications whenever Jass Richards releases a new book.