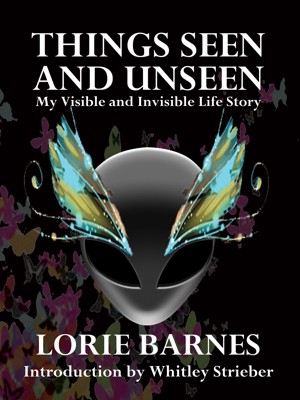 Things Seen And Unseen - My Visible And Invisible Life Story

Rated 5.00/5 based on 1 reviews
My autobiography starts in 1930, ending in 2012. It encompasses my theatrical upbringing and career, and my psychic, paranormal and alien contact experiences. More
As I set forth in my Preface, for years many have wanted me to write about my extremely peculiar life experiences. I hesitated, since I never attained celebrity in my performing career, and wondered who would be interested in publishing such a tome from an unknown writer. I was no longer able to perform in my seventies, so after an entire lifetime of writing poetry, I finally managed to have a few poems published. About then, I began to write THINGS SEEN AND UNSEEN, and since, have revised it seven times.

In 1987 I had the great good fortune to meet a kindred soul who has shared, and still shares, many of my strange experiences that many consider to be "outside the norm". I read his New York Times best-selling book, COMMUNION, and wrote him a letter about a personal alien encounter. His name is Whitley Strieber. Very soon, I received a phone call from his wife Anne, and the three of us met for lunch. He tells of this in his glowing introduction to my book, and about things that transpired afterwards. I am most grateful for this.

My book includes experiences that begin as a mere toddler, continuing into the present time. Each chapter relates another strange experience during my life, either with afterlife beings or those of an alien ilk. During my hectic life, I became a Broadway and cabaret dancer, singer and actress and mom of five. I later became grandmother to nine, sadly now eight, and am now great-grandmother to two. Starting with marriage to my dancing partner at seventeen, I write about five more marriages, and mention three affairs with male celebrities. One husband and one lover were suicides, thankfully after I was out of their lives. My last marriage in 1987 was the best, and the only one ending in my spouse's demise.

My parents sent me to private pre-school, where I learned to read at three. By five, I was allowed into first grade, though the law specified children had to be six to enter that grade. This was because I was reading on a third grade level, and the Principal of P.S. 87 obtained permission for me from his friends in high positions. In fifth grade I came in second in a state-wide grade school level essay contest. I wrote poetry from the moment I could write. In fact, my parents told me I spoke poems even before I could write. I was also having the strange experiences that are dealt with in my book, from as long as I can recall. While spending a sixth grade semester in Louisville, Kentucky with my grandmother while my theatrical parents toured, I won a Kentucky state-wide grade school spelling bee. I was invited to attend the National Spelling Bee that year, but my parents could not arrange this.

I graduated Grade, or what is now Middle, school at eleven, and entered High School at twelve. I did not fare well in Julia Richman High in New York City, a public school. A good friend of my parent's, Milton Berle, arranged for me to enter Professional Children's High School, as I was modeling professionally by my Sophomore year. I was also attending dance, voice and acting classes daily. I had to do some catching up at PCHS, as its standards were higher, but I was happier there. In Junior year I was top of my class in English, and was informed I had earned a forthcoming scholarship for Literature or Journalism, my choice, to Barnard College. When I joyfully broke this news to my parents, they succinctly told me I was not to enter college. Why in the world did I think they'd spent all their money and effort in training me for the stage, to be a "star"? Most parents dreaded having their kids yearn to be on the stage. Mine would hear of nothing else, though all I wanted to do was write! As a result, I never went to college. Instead of that, I entered the world of solo cabaret performing at the age of fifteen, in California, while mailing my hand-written lessons back to my school in New York.

In 1961, I took a correspondence writing course, which helped to pick up the dropped threads of the fabric of my literal talents. In the early 1970s, I enrolled at the New School for one semester with Anatole Broyard, the brilliant newspaper columnist and writer. Due to personal upsets described in my book, I was unable to complete it. In 1987 I had the good fortune to become Secretary to author Whitley Strieber, and finally had a few poems published from the 1990s on. With renewed hope, I began writing THINGS SEEN AND UNSEEN in the 1990s.
-Lorie Barnes

The word is getting around about Lorie Barnes' "Things Seen and Unseen: My Visible and Invisible Life Story" book via my book review. In addition to being posted on Whitley Strieber's Unknown Country website, it now appears on Alan Steinfeld's New Realities site and the UFO Diges" site posted by editor Robert Morningstar. A commentator on Strieber's site was "riveted" by the book, calling it "fascinating" and "loving it." -- Harold Egeln

(reviewed 4 months after purchase)
Harold Walter Egeln, Jr reviewed on March 24, 2014
(no rating)
I purchased this book from Smashwords and wrote a rave five-star review of Loris Barnes' book that can be read in full at http://www.unknowncountry.com/insight/review-lorie-barnes-things-seen-and-unseen as posted by Whitley Strieber's Unknown Country website. -- Harold Egeln, a professional journalist working in New York City.

You have subscribed to alerts for Lorie Barnes.

You have been added to Lorie Barnes's favorite list.

You can also sign-up to receive email notifications whenever Lorie Barnes releases a new book.