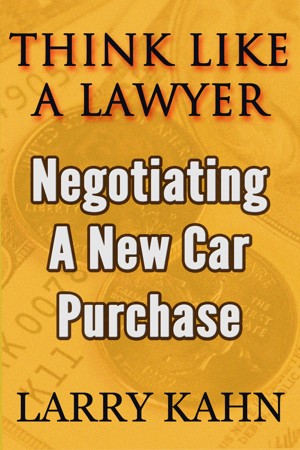 Think Like A Lawyer: Negotiating A New Car Purchase

Think Like A Lawyer: Negotiating A New Car Purchase provides a simple procedure based on the author's negotiating experience with car dealers and in the business world. It focuses on new car purchases, although some of the advice is transferable to used car negotiations, as well. Kahn's style is concise, providing clear action steps without puffing up the writing with long anecdotes or redundancy to make it seem more impressive. If you follow the author's methodology, you will avoid the tricks and traps employed by car salesman and ultimately save hundreds, maybe even thousands, of dollars on your next new car purchase!

Larry Kahn is a retired attorney with twenty years’ experience advising corporate clients on decisions often involving stakes in the hundreds of millions of dollars. He was raised in a working class home and had no special privileges, but graduated from Yale Law School, married a wonderful woman from a similar background, raised two college-educated sons with her, and retired at age forty-five. He has learned some tricks to simplify life along the way and is writing the Think Like A Lawyer series to pass that knowledge on to others.

Negotiating A New Car Purchase is the first ebook in the series. Future titles include A Guide To Making Good Decisions, Planning For The Long Term, and Protecting Your Student From Landlords & Roommates.

Larry Kahn, the author of The Jinx and King of Paine, toiled for twenty years as an attorney in the fast-paced world of domestic and international mergers and acquisitions, first at a major New York law firm and then at an Atlanta Fortune 500 company. He penned The Jinx while on sabbatical in 1999 and is now devoted to writing fiction full time. Many of his more cynical legal clients and associates have accused him of writing fiction full time for many years. He resides in Atlanta with his family.

Larry developed a keen interest in social issues while attending Yale Law School, an idealistic spirit that continues to spice his novels. The vision of a colorblind America in his political thriller The Jinx led to endorsements by leaders of the ACLU, National Urban League and Artists Against Racism. And as the Baby Boomer generation scatters about the country, King of Paine envisions a renewed emphasis on family and tradition in which Americans create for their venerable elders, and ultimately themselves, a peaceful place to die.

A great read, easy to understand, great tips...I'm going to be using this in a few months for my new car purchase. Thanks!

You have subscribed to alerts for Larry Kahn.

You have been added to Larry Kahn's favorite list.

You can also sign-up to receive email notifications whenever Larry Kahn releases a new book.