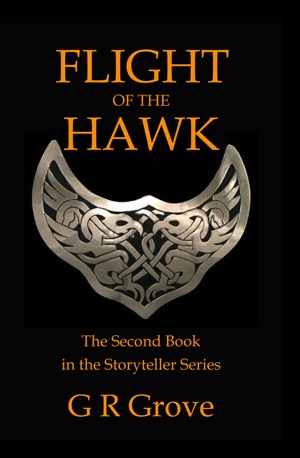 Flight of the Hawk

Reviews of Flight of the Hawk by G. R. Grove

This is the continuation of the Storyteller series by G. R. Grove, volume two of the first trilogy, in what is hoped will be a much longer series. Flight of the Hawk continues from where volume one left off, and, in fact, repeats one of the stories, from the first book, but does so as if that story is being told at a later time than the first telling. Young Gwernin storyteller and his friend Neirin the bard continue the journey they began in volume one of this series.

Like Storyteller, Flight of the Hawk is a series of intricately interwoven short story chapters which can both stand alone (but why miss out on the larger story... begin with book one: Storyteller instead of here) and form a larger, complete story, well fashioned so that the chapter/stories fit together like the feathers of a bird's wings. Flight of the Hawk is well written and smoothly paced; to say it is a pleasure to read is probably the biggest understatement I've made in all 100+ reviews that I've written so far.

The Storyteller series is recommended for most everyone 16 and up, but is an especially ideal read for those who love historical fiction, and for those who like a bit of fantasy now and then. This review is based on the Kindle version I downloaded from Smashwords.com, which was given to me free by the author. This review has been simultaneously posted on Dragon Views, LibraryThing, Amazon.com Smashwords, and YABooks Central.

FLIGHT OF THE HAWK is carefully crafted for maximum historical accuracy, so far as modern historians and scholars can tell with what is left to us from the period. I'm still a new medieval scholar, myself, but thrilled to see how carefully the details were woven, the dialogue constructed, and the Anglo-Saxon rendered.

Yet I struggled through it, possibly in part because I have not read the first in the series, and possibly because of how much I tend to rely on back cover summaries to tell me the overreaching plot of the book so I might recognize major plot points when they happen; there was no such crutch for me in this book. As a result, I was unsure of what the main point was, and the plotting felt episodic and lacked urgency. Obstacles were overcome in ways that felt convenient and far too easy, and the bards went on their way with barely a second thought.

I didn't hate the book, but it's not going to be an undying favorite, either. However, I can easily see how others, especially those who have read the first book, might find it much more absorbing and understandable than I did.

G.R. Grove's knowledge of the period gives this story such solid roots, and Gwernin and Neirin are joyous travelling companions. The lyrical patterning and the stories-within-stories grew more and more compelling as the book progressed, and I found myself pulled more and more into their world.

It's always a gamble starting with book #2 of a series, but this time it paid off, and I will be going back to pick up #1 as soon as my budget allows.

Flight of the Hawk caught my attention and interest from the very first chapter. I look forward to reading the previous volume in the intended series and any follow up volumes that G. R. Grove will add to the series. I find the time period of the novel very fascinating. It is a period of time that one has to fill in a lot of empty spaces since there is not much of a written history to fall back on.

The approach of using bards to tell the story is a very good way to look at different areas of the islands since they did travel from place to place more then the average person at the time. Grove's description of the land and towns seems to fit what one might imagine the environment would look like during this time of history.

The story that Grove weaves is interesting and captures the reader's interest from the very first. I believe that the book will deep anyone's attention and it does become hard to put down. As I stated previously I look forward to reading more "but that...is a story for another day".

I really enjoyed the book. After reading the first volume Story Teller, by G.R. Grove. I have to say it was wonderful writing and very captivating.

You have subscribed to alerts for G. R. Grove.

You have been added to G. R. Grove's favorite list.

You can also sign-up to receive email notifications whenever G. R. Grove releases a new book.