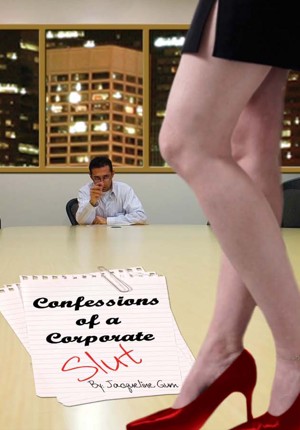 Confessions of A Corporate Slut

By Jacqueline Gum
Rated 3.00/5 based on 1 reviews
Wry retelling of the life of a corporate wife...yes it's a career! More
A woman’s role in marriage has been in a state of evolution since Adam and Eve. But the 70’s and 80’s were a confusing time. Most women had traditional role models in their mothers and grandmothers who were the typical stay-at-home moms of the era.

But the feminist movement was steaming ahead with a clear message that women could “have it all.” During this time, there was a segment of women who blended those philosophies by becoming “professional” corporate wives.

In this story, Roberta Wendall sells her successful company, and applies her business acumen to the growth of her husband’s company. Working unpaid and behind the scenes, her advice is sought by her husband’s minions and even industry professionals who are aware of her role. At the same time, she masters a specific skill set by becoming the ultimate hostess to his many business associates.

She’s unaware that her much directed creation of her husband’s image, resulting in the dynamic growth of his company, is chipping away at her very substance.

It isn’t until he surreptitiously dumps her that she realizes that she created a world for him, yet is left standing outside the gates peering in. Divorce, to her, was like being fired from a well-earned executive position.

Her journey is filled with irony and wry humor as she slowly comes to grips with the knowledge that she was complicit in her own destruction.

While Confessions of a Corporate Slut deals with the complexities of the life of a corporate wife, the backdrop is based in a corporate environment and highlights the unique way it colors the professional woman and her view of marriage.

I was born, raised and educated throughout the Midwest and began writing as soon as I could hold a pen. It seemed easier than talking. I regularly wrote stories to my mom and dad and though encouraged to pursue writing, I found myself at the University of Cincinnati, College of Business. My career was spent in a male dominated industry (heavy duty restaurant equipment) where I managed to successfully navigate a sea of testosterone.

A sane woman wouldn’t choose writing novels as a vocation. But though steeped in angst, writing feeds my soul. I used to arrange flowers but now I derive great joy in arranging words. The idea is that people might cry or laugh as they connect to them.

My first novel, Confessions of a Corporate Slut was published in January 2008. The title is metaphorical…tongue and cheek for smart women who give away their intellectual property for free…to benefit a spouse. Its publication preceded the very public stories of Silva Spitzer, Elizabeth Edwards, et.al. Midwestern Review gave it a 5 star rating.

Haunting Tryst, a short-short story, was published by Bewildering Stories, an online literary magazine, in 2009.

I am currently seeking representation for The Accuser’s Burden, my second novel, and actively writing my third novel, The Flame Dame Chronicles.

This was an interesting story. It was also very informative and enlightening. I appreciated the easy flow to the storyline and the fact that it was quite well written. Each section seemed to flow naturally into the next without pause. Unfortunately I found the story a little tedious a couple of times. It began to feel like the main character found herself in the same situations time and again. Although that does happen in reality, within the parameters of a novel it begins to seem repetitive.

The main character was phenomenally well developed, as one would expect with a story that follows her from childhood to late mid-life. There were a couple of times where the main character’s actions did not seem to correlate fully to her personality. That said, they did correlate perfectly with the personalities and actions of those around her at the time. You also get to know those close to her fairly well. I would have appreciated a bit more development to some of the supporting characters. I felt that there were some who were simply names on a page.

As a whole, this was a very heartfelt story. I appreciated the perspectives that became very apparent throughout. It was definitely a novel that made you stop and think. It also makes you feel grateful for life as a whole.

You have subscribed to alerts for Jacqueline Gum.

You have been added to Jacqueline Gum's favorite list.

You can also sign-up to receive email notifications whenever Jacqueline Gum releases a new book.