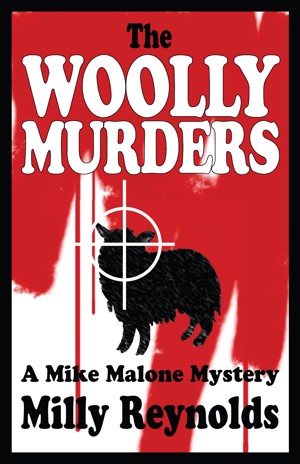 By Milly Reynolds
Rated 5.00/5 based on 1 reviews
Detective Inspector Mike Malone finds that he must keep all his wits about him when a very odd crime wave hits the litte Lincolnshire town that he has recently moved to for a bit of peace and quiet. With his trusty DS by his side, he wades through wool and blood to find the mastermind behind these dreadful acts.
This is the first of a series of tongue-in-cheek crime mysteries.

As you may have already guessed, Milly Reynolds is not my real name. Like my 'hero' Detective Inspector Mike Malone, I also hide my real identity.

Having 'retired' from my job, I was a full-time teacher in a secondary school, I decided to pursue my dream of becoming a writer.

So why Mike Malone? I love all things detective and wanted to create my own series. However, I decided not to go for the deep, dark thriller - I could never compete with the masters of that genre, like Jo Nesbo whose books I adore? Therefore I came to the decision that the Mike Malone series would be off-beat. I like to think that there is humour in my books; I don't want to scare people, I want to make them chuckle - there is not enough laughter in the world at the moment. As the series has progressed, I have become very attached to Mike; he is the comfortable pair of slippers that I put on at night. My husband has also become attached to Fi and I am under strict instructions not to let anything happen to her - yet.

Living in Lincolnshire, I love the flat, endless landscapes and want these to be seen in my books alongside places that I know and love. Mike Malone has moved from the city to Lincolnshire and has fallen in love with the place; me, I was born here and can't think of anywhere else I'd rather be.

However, although Mike was my first creation, he is not the only one. I have also created Jack Sallt, another Detective Inspector. Jack is grittier than Mike and there is not the humour in his stories that there is in the Mike Malone stories. I wanted to write a more 'grown-up' detective story. When time allows this will be developed into a series as well.

With two male detectives under my wing, I also decided that it was time for the girls to take centre stage and 'Scorpion's Tale', my first novel featuring Liv Harris, a character in the Jack Sallt novels, was published in 2013. I am hoping that Liv will make another appearance at some point in the future.

Not content with crime, I have also wandered into the realms of romance; my first stand-alone novel 'The Unseen Sky' was published August 2011.

I'm lucky, I enjoy writing and find it just as relaxing to sit and create as it is to read, although sometimes a good book can get in the way of my writing. I read on average 50/60 books a year and always keep my blog updated with reviews. Anyway, I hope you like my novels. I have fun coming up with ideas for Mike - the more bizarre the better. One reviewer of my books wrote that these books are 'completely off the wall' and another commented that they are 'set in a bubble', a 'whimsyland'. I'm happy with that. 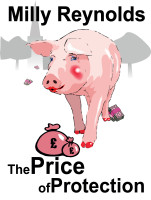 Definitely worth a read.

You have subscribed to alerts for Milly Reynolds.

You have been added to Milly Reynolds's favorite list.

You can also sign-up to receive email notifications whenever Milly Reynolds releases a new book.