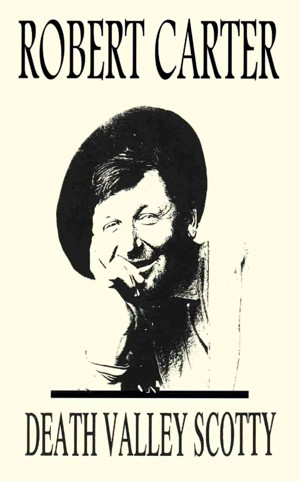 By Robert Carter
Around the beginning of the 20th Century, Walter E. Scott - Scotty to his friends - was passing through Death Valley, California, when he happened upon a dead man. Beside the corpse was a dog dying of thirst, and in the man's pocket was a piece of rock glittering with pure gold ...
So begins one of the most endearing tales to come out of the American West.
Available ebook formats: epub mobi pdf rtf lrf pdb txt html
First 20% Sample: epub mobi (Kindle) lrf more Online Reader
pdb
Price: $2.99 USD
Buy Add to Library Give as a Gift
How gifting works
Create Widget
Tags: romance california western wild west con man american historical fiction buffalo bill notorious romance historical death valley scotty true grit historical 1900s humor action adventure
About Robert Carter

I was born in Staffordshire, near Etruria, the place made famous by Josiah Wedgwood, but was brought up in Sydney, Australia and later in Lancashire, England. I studied astrophysics at Newcastle University, where I started the student science fiction society. Writing novels has always played a part in my life, and I've tried to see the world enough to be able to write fiction with the help of personal experience.

After university, the US oil industry was booming so I went to Dallas, Texas, later on I worked on rigs in various parts of the Middle East and the war-torn heart of Africa. I was aboard the Ron Tappmeyer, a rig that blew out in the Persian Gulf, killing 19 men. It was dangerous work, but well-paid, and it took me to places that outsiders rarely see, like the Rub-al-Khali of Arabia and hard-to-reach parts of equatorial Africa.

When I left the oilfields, I spent time on travel, first to East Berlin and Warsaw, then to Moscow and Leningrad. From there I took the Trans-Siberian railway to Japan. In Hong Kong, I worked on a road survey, took tea with the heir of the last king of Upper Burma near Mandalay, and on the path to Everest base camp just happened to run into Sir Edmund Hillary. After traveling around most of India, Sri Lanka and Indonesia, I returned home and took up a job with the BBC. Four years later, I left BBC TV to write. I finally settled in London, but I still like to head off to interesting parts when time allows.

You have subscribed to alerts for Robert Carter.

You have been added to Robert Carter's favorite list.

You can also sign-up to receive email notifications whenever Robert Carter releases a new book.