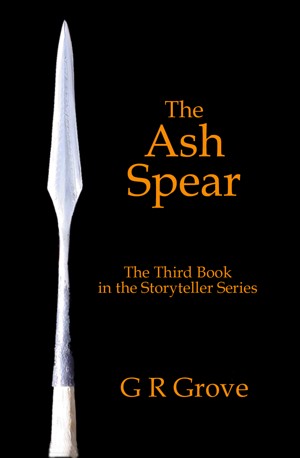 By G. R. Grove
Rated 4.17/5 based on 6 reviews
In 6th century Wales, the ash spear was a symbol of warfare and of manhood, but it also stood for awen, the poetic inspiration of the bards. As war comes to North Wales, bardic apprentice Gwernin must master all three of its meanings in order to keep himself and his friends alive. The Ash Spear follows him in the thrilling conclusion of this first trilogy in the Storyteller series.
Available ebook formats: epub mobi pdf rtf lrf pdb html
First 30% Sample: epub mobi (Kindle) lrf more Online Reader
pdb
Price: $2.99 USD
Buy Add to Library Give as a Gift
How gifting works
Create Widget
Tags: wales king arthur medieval bards taliesin

Reviews of The Ash Spear by G. R. Grove

The Ash Spear is based in medieval Britain in the 6th century, the Dark Ages, and is the third of the series.
The other books are Storyteller and Flight of the Hawk written by G. R. Grove.
Gwernin Kyarwyd is an apprentice bard, or storyteller, and this is a story of his journeys and trials. He is telling the story which begins in his seventeenth year and his second year of being an apprentice to become a harper and bard from his teacher Talhaearn Tad Awen. Talhaearn is the pencerdd (head poet) and harper to Cyndrwyn, prince of western Powys in mid-Wales.
Gwernim has a love, Rhiannedd, who is "the dark-haired delight of my heart" and she is carrying his child.
There are a number of characters in this book that have a close connections and loyalty to each other. Some other characters are Taliesin Ben Beirdd, Ieuan, Ugnach of Caer Sean and Neirin. The names are Welsh and hard to understand at first.
I had to go back and read the first chapters to get the names straight. I have not read the other two books and think they may have helped but this can be a stand alone book. I began to pull the pieces together.
The book is after the time of King Arthur and Taliesin tells the story of when he was the bard for Arthur and the final battle.
One character in the book, Neirin, is going to walk the Dark Path and needs the help of three bards. The Dark Path is a Druidic spiritual rite of passage. It is becoming a true bard. They go to the Island of Mon,
The Ash Spear was "the symbol of warfare and manhood but also stood for awen, the poet's inspiration of the bards". I had to find this on researching because somehow I missed the definition in the book.
I liked the saying after most chapters" O, my children, is a story for another day" which encourages the reader to keep reading. It was like a bard leaving you waiting.
G. R. Grove does an excellent job of descriptions and helps the reader know where the characters are and what they feel. There are emotions, pain, food, drinks, people, daily lives and worry. I really liked this book and look forward to reading her other books. I give it a five star because of the details and leaving me to want to do more research.
Go to the authors blog on treGwernin.blogspot.com to see what she is writing.

The Ash Spear by G. R. Grove is an entertaining fantasy novel with a lyrical, engaging narrative; it is a spirited book with a strong voice. The book is the third entry in the author’s Storyteller series (Storyteller and Flight of the Hawk being the others). I haven’t read the other books, but I found this novel stands on its own without confusing the reader on what went before.

The Ash Spear is set in sixth century Britain and tells of the continuing adventures of the bard-in-training Gwernin as he encounters kings, politics, war and hardship. I was impressed with the setting and background; the author did impeccable research and the history is brought to life with magnificent detail.

Written in the first person, the tale is spun with an effective tone, well flavoured in nuance and the right inflections. The narrating character is a genuine portrayal, coming across as a three-dimensional person with flaws. He was at various times amusing, heroic, irritating and unsympathetic, but always interesting. The book also does a nice job in depicting other characters and having them interact as a whole.

The Ash Spear does have a few problems, with occasional lapses in grammar and some poorly compiled sentence structure in the beginning of the novel. Also, the author ended the chapters with the same sentence, which I found quite annoying and repetitive. The novel, perhaps, could have benefitted from a shorter length as well; while beautifully written, some of the scenes had expansive descriptive passages which caused the pace to meander a bit.

Still, it was an enjoyable novel to read and appealing enough for me to consider reading the rest of the series.

I have enjoyed reading the Storyteller Series. I had read the first two books before reading The Ash Spear and I liked all three. The backstory from the earlier books comes to something of a conclusion in this book, but some openness is present (suggesting more books to come?). Reading the other two books is not necessary, each book can stand on their own, but the reader has a fuller experience with all three.

Gwernin is an interesting character, his ordeals and successes are believable and Grove is a talented author. It's clear the time period has been carefully researched. I'm a fan of any medieval/Authurian era fiction; and a 6th century traveling Welsh apprentice bard was definitely a topic to spark my interest. I look forward to reading more from Grove in the future.

Finally finished the book after many interruptions.
Having not read the first two books, I thought I would not be able to understand this one but to be honest it does not seem to matter - nothing seemed to rely on the original books. Having said that my feeling was that this was a story lacking direction and content. It seemed to ramble from fireside to fireside without any of the "beginning, middle and end" that is normally associated with a story.
Over all, I probably just did not get the point but this is not a book that would make me rush out to read the first two or any more of this series.
Thanks for the opportunity to read it anyway.

As I finished G. R. Grove's The Ash Spear I found myself wishing for more. I want to know what adventures come next for The Storyteller, Gwernin. I find Gwernin's telling of his adventures as an interesting way to look at the history of this period of the British Isles and particularly Wales. This being the time of traditions and history being handled by the bards of the time it is an interesting way to give us a look at what life was like at this time. I found this volume a very good continuation of Gwernin's story that I started in the second of the trilogy, Flight of the Hawk. Though it is the third in the series the books do stand alone well, though I will now have to get the first to see how Gwernin's career as a storyteller started.

I feel this gives us an good peek at what life at all levels was like during this period of history. It is a time hidden the mists because we have no real written record of what occurred at this time. We have only the stories and traditions that have been handed down to us. I believe Grove does and excellent job of weaving what is known with the traditions to give all a glimpse of what it would have been like to live at this time. From the position of the local kings down to what life would have been like for a slave of the time. I truly enjoyed reading this volume.

My only wish is that some how the story of Gwernin will be continued in the future. I believe he has a lot to tell us as he continues his life as a bard in the early days of Wales and the surrounding area. Gwernin please tell us more. Of course that "is truly a story for another day.

I did not know this was book 3 when I started reading it, so I thought it strange how sparse the references to the prior history of the characters was.

This historical fiction book comes across as being well researched and entertaining. The characters feel natural and the setting seems fine. The plot kind of meanders on, which I am somewhat ambivalent about. This means the plot feels like it follows a real person (why it follows just this person instead of somebody else isn't clear to me) but it also means there are short passages where the story doesn't really move anywhere.

The author has some minor problems. The narrative is told from the main character's point of view instead of the normal omnipotent storyteller. The author sometimes makes too much of the description, something normal in writing but that doesn't feel natural when you keep in mind who is telling the tale. There were several instances where I thought that this isn't how you tell a story, this is how you write a story.

Over all it was a book well worth reading, with some things such as the catch phrase at the end of each chapter "But that, O my children, is a story for another day" is something you either like or get annoyed by the repetition. Other thing such as using especial instead of extra or special made me stop and consider. Something that I don't see as good while in the middle of reading fiction.

You have subscribed to Smashwords Alerts new release notifications for G. R. Grove.

You have been added to G. R. Grove's favorite list.

You can also sign-up to receive email notifications whenever G. R. Grove releases a new book.