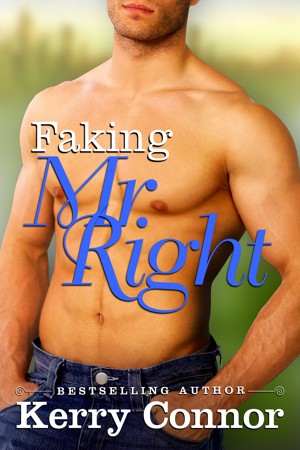 Rated 3.00/5 based on 1 review
Former soldier Sam Curtis isn't Melissa Brock's idea of the perfect man. But with time running out, the advertising executive has no choice but to try to pass him off as the real thing for her next ad campaign. But when she finds herself falling under his spell, Mel has to wonder: is she falling for her own Mr. Right, or under the hype of her own campaign? More
The Perfect Man…For Her?

Who is the perfect man? Ad executive Melissa Brock might not know the answer, but she does know it’s not Sam Curtis. But with time running out and no flawless male specimen in sight, Mel has no choice but to try and pass off the former soldier as the real thing for her next campaign. Her business partner claims Mel only needs to “smooth out Sam’s rough edges,” a comment that has her reaching for a sand blaster. Confident, irrepressible, and sexy as hell, Sam has an unerring talent for finding trouble and more appeal than any man has a right to possess. Against her better judgment, she finds herself falling under his spell. But Mel has to wonder: is she falling for her own Mr. Right, or under the hype of her own campaign?
Available ebook formats: epub mobi pdf rtf lrf pdb txt html
First 15% Sample: epub mobi (Kindle) lrf more Online Reader
pdb
Price: $2.99 USD
Buy Add to Library Give as a Gift
How gifting works
Create Widget
Tags: romantic comedy contemporary romance
About Kerry Connor

Was a nice smooth read for a relaxed afternoon , not as steamy as the other books . The plot is the usual been round the block hero and overworked heroine .

You have subscribed to Smashwords Alerts new release notifications for Kerry Connor.

You have been added to Kerry Connor's favorite list.

You can also sign-up to receive email notifications whenever Kerry Connor releases a new book.