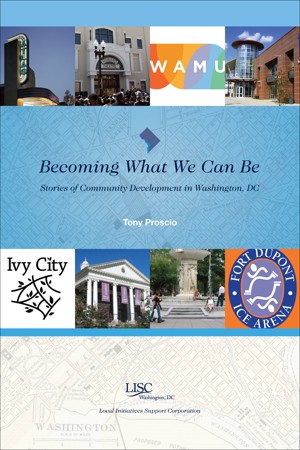 Becoming What We Can Be: Stories of Community Development in Washington, DC

By Local Initiatives Support Corporation (LISC)
Rated 5.00/5 based on 1 reviews
This book chronicles stories of community development in Washington, DC. It gives insight into a movement that dreamed big, weathered setbacks, and persevered, bringing unimagined rebirth to neighborhoods such as Columbia Heights and the H Street Corridor. A clear and compelling account, it is a must read for anyone interested in resident led movements and neighborhood revitalization.

The Local Initiatives Support Corporation (LISC) is the nation’s largest community development support organization. Our mission is to help residents create healthy and sustainable neighborhoods that are good places to live, work, raise children and conduct business by investing in projects, programs and initiatives that build on the assets and address the challenges in their neighborhoods.

For anyone interested in nonprofit community development, and especially its history, Tony Proscio's Becoming What We Can Be is a treasure. It provides the untold story of the comeback of Washington's neighborhoods -- such as Columbia Heights, Marshall Heights, H Street, and the Parklands -- that in the 1980s many thought were beyond redemption. Proscio also draws individual portraits of the unknown heroes of this surprising movement to save the District. He does not shy from describing the challenges and setbacks to community development, including the devastating 2002 Washington Post article that exposed the waste in the local system without acknowledging the substantial achievements. Anyone who wants to know more about the recent history of the nation's capital and the remarkable people who cultivated attractive new stores, schools, and low-income housing in its once depressed neighborhoods should read Proscio's book.

You have subscribed to alerts for Local Initiatives Support Corporation (LISC).

Would you like to favorite Local Initiatives Support Corporation (LISC)?

You have been added to Local Initiatives Support Corporation (LISC)'s favorite list.