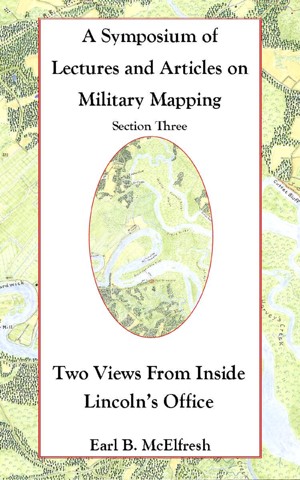 A Symposium of Lectures and Articles on Military Mapping Section Three: Two Views from Inside Lincoln’s Office

By Earl B. McElfresh
Two articles:

"Since I Came to This Place" describes President Lincoln's White House Office.

The second article describes Francis Carpenter's famous painting. All of the items shown in the painting, from the pictures on the wall to the papers on the floor, have some significance in relation to the preparation and presentation of the Emancipation Proclamation. Nothing is incidental.
Available ebook formats: epub mobi lrf pdb html
First 10% Sample: epub mobi (Kindle) lrf more Online Reader
pdb
Price: $0.99 USD
Buy Add to Library Give as a Gift
How gifting works
Create Widget
Tags: civil war abraham lincoln white house emancipation proclamation
About Earl B. McElfresh

Earl B. McElfresh (St. Lawrence University) is the author of Sidereal Days, The History of Rock & Roll, A Romance (Tammy Norie Press e-book 2012,) Maps and Mapmakers of the Civil War (Abrams, 1999) and contributing editor to Company Commander by Charles B. MacDonald (History Book Club, 2007.) He is a regular contributor of Civil War articles to Civil War Times Magazine.

His plays Marvels of Modern Man and Amid Planetary Music were performed at St. Lawrence University. His play Honor Luck received a reading at the New Phoenix Theater in Buffalo. His screenplay Lazy Eye was filmed and premiered at the New School in New York.

Cartographer for McElfresh Map Company LLC, he has prepared twenty-three maps. Twenty of the maps have been main or featured selections of History Book Club. He is currently preparing endpaper maps for the four volume Civil War set being being published by Library of America and entitled The Civil War: Told by Those Who Lived It.

He served two years in Olean (NY) city government on the Common Council—a great experience—and he played rhythm guitar with the band The Fabtones. The cabaret laws of New York City pretty much restricted their playing to the wonderfully hospitable streets of New York City.

He and his wife Michiko have three children and a cat. Like Roger Miller’s King of the Road, they have no pool.

Learn more about Earl B. McElfresh

Also in Series: A Symposium of Lectures and Articles on Military Mapping

Reviews of A Symposium of Lectures and Articles on Military Mapping Section Three: Two Views from Inside Lincoln’s Office by Earl B. McElfresh

You have subscribed to alerts for Earl B. McElfresh.

You have been added to Earl B. McElfresh's favorite list.

You can also sign-up to receive email notifications whenever Earl B. McElfresh releases a new book.