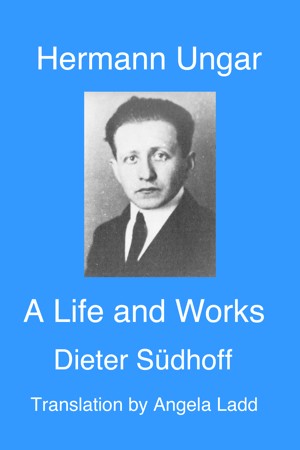 Hermann Ungar: a Life and Works

Vicky Unwin has had a long career, centred round her African roots, in both book and newspaper publishing. She was Publisher of the African Writers Series and authors such as Chinua Achebe, Enterprise Director of the Telegraph Group, Managing Director of PR Newswire and latterly Media Director for The Aga Khan Fund for Economic Development.

After her daughter's death in 2011 she spearheaded a campaign to introduce compulsory drug education in schools to warn of the dangers of ketamine and legal highs. As a result, she has an extensive media profile and contacts. She started writing in response to her daughter's death and then to help overcome her illness.

Her book Love and War in The WRNS (History Press), a collection of her mother's letters home in the Second World War, was published in June 2015 and received favourable reviews, the Evening Standard saying 'Unwin's selection manages to both illuminate the history of the war and draw the reader in to Sheila's personal story...it offers a tantalising glimpse into the rarefied world of the WRNS'.

Her second book, The Boy from Boskovice: a father's secret life, a memoir exploring her father’s contradictory personality and what makes a good man bad, nature or nature, is published by Unbound in January 2021.

She gave up full-time work following her daughter's death but continues to contribute to public life. She is Chair of an international literary magazine, Wasafiri; former Judge and current Council Member for the Caine Prize for African Writing; Chairman of a contemporary London Art Gallery, Art First; Trustee of Transform Drug Policy Foundation, former Trustee of the Angelus Foundation, the drug awareness charity; and a Trustee of United World Schools, whose charter is to 'teach the unreached'.

Living in London, she has a website http://www.healthylivingwithcancer.co dedicated to her successful strategies to overcome her illness and to help others in similar situations. She also writes a travel blog, http://www.vickygoestravelling.com and film reviews on www.vickyatthemovies.net. She has accounts on Instagram, Twitter & Facebook and posts frequently.

Reviews of Hermann Ungar: a Life and Works by Vicky Unwin

You have subscribed to alerts for Vicky Unwin.

You have been added to Vicky Unwin's favorite list.

You can also sign-up to receive email notifications whenever Vicky Unwin releases a new book.