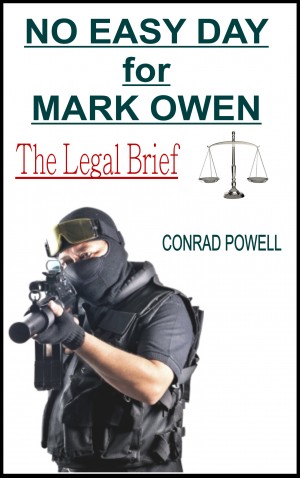 No Easy Day for Mark Owen: The Legal Brief

By Conrad Powell
A Navy Seal renamed Mark Owen battles against the US Government on allegations that he breached his Non-Disclosure Agreement. Now he battles harder to defend his character than when he took out Osama Bin Laden. No Easy Day for Mark Owen takes you on an in depth journey into the unfolding legal drama of allegations of espionage, traitor-ism, and leaking classified information. More
EXCERPT from book:-

“A wise defense attorney could turn this case into a referendum on the government’s attempt to conceal the truth and silence a defenseless Matt B. who is simply being railroaded by the American Government.

I can hear the closing argument now or at least the argument I would make to defend him.

“Ladies and Gentlemen of the jury; What we are here to determine is not how a brave soldier who risked his life to defend this great country of ours could attempt to sell it out for a buck as the prosecution would have you to believe. We are here to determine how on God’s earth could this brave soldier risk his life for America yet have to fight harder for his own life, own character, own existence harder than he had to on the battlefield. You have the power to set this brave soldier free; brave not only for taking out the greatest terrorist to threaten our shores, but braver yet for holding the mirror of truth up so that his beloved America can also see that truth reflected like the twilights last gleaming.”
A jury could certainly find on a balance of probabilities that the government tried to cover-up the truth and that Matt B. was simply trying to give the public the truth about the raid.

(Crime Thriller) Detective John Aston Martin Start Thriller Series, Book 1): START
Haunted by the biggest case in his past, New York City Detective John Aston Martin Start, on a routine murder investigation discovers a plot to rob the Bank of Jamaica in the island nation and sets his sights on attempting to thwart the plot. Quentin Errar, the illusive head of an international weapons, drugs, and money laundering empire has hired, The Posse, to carry out the plot. In Jamaica, he discovers that someone is out to kill him but who and why? In a race against time not even Usain Bolt could run, Start must find these answers before he is shipped back to New York in a body bag.
(Paranormal) Angelfall - Twilight at Dawn Saga (Book 1) – Parts 1 to 7.
A fallen angel roams Earth as a vampire for 8,000 years before coming face to face with his miserable existence. He angers Lucifer (Son of The Morning Star) and becomes an outcast from the Dark Kingdom. Now rejected by both good and evil, he must find himself or cease existence. With Lucifer's attempt at a second overthrow of The Kingdom of Heaven brewing, his actions are even more critical.

Conrad Powell leads a life as a lawyer, preacher, and writer. He is the founder of Conrad Powell Prophetic Ministries in Junction, Saint Elizabeth, Jamaica which focuses on delivering the Rhema Word of God to all who will receive and believe to the edifying of the Body of Christ.

Also in Series: No Easy Day

You have subscribed to alerts for Conrad Powell.

You have been added to Conrad Powell's favorite list.

You can also sign-up to receive email notifications whenever Conrad Powell releases a new book.