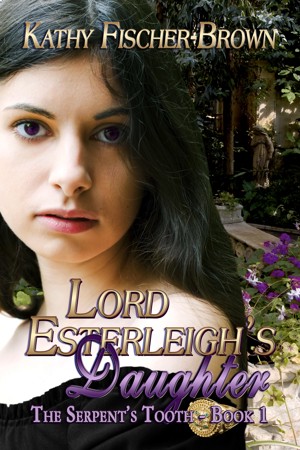 As a child, Anne Fairfield dreams of the father she never knew, the hero who died fighting the French and their Indian allies in a land across the sea. Her mother’s stories, and fantasies of her own devising, sustain and nurture her through a poor and lonely existence. More
Lord Esterleigh's Daughter by Kathy Fischer-Brown, published by Books We Love.

As a child, Anne Fairfield dreams of the father she never knew, the hero who died fighting the French and their Indian allies in a land across the sea. Her mother’s stories, and fantasies of her own devising, sustain and nurture her through a poor and lonely existence. Until one winter night, a strange man comes to call, and the life she has known comes crashing down like shattered glass.

Forced to confront sordid truths, secrets and lies, the headstrong young woman begins to learn that, like generations of Darvey women ruled by their hearts, she is destined to follow in their footsteps.

Set against the backdrop of 18th century England, Lord Esterleigh’s Daughter is the first book in “The Serpent’s Tooth” trilogy, which follows Anne from the rural countryside, to London society and into the center of the American Revolution.
Available ebook formats: epub mobi pdf rtf lrf pdb txt html
Price: $2.99
$1.50 USD
Buy with coupon Use the code AB42C at checkout for 50% off
(Offer good through Dec. 26, 2021 )
Have a better coupon?
Add to cart, then apply your coupon
Add to Library Give as a Gift (using coupon)
Have a better coupon?
Add to cart for gifting, then apply your coupon
How gifting works
Create Widget
Tags: love story womens fiction historical trilogy best selling author historical series georgian england books we love strong heroine the serpents tooth series winter fire
About Kathy Fischer-Brown

As a child Kathy wanted to be a writer when she grew up. She also wanted to act on the stage. After receiving an MFA in Acting from the Mason Gross School of the Arts and playing the part of starving young artist in New York, she taught theater classes at a small college in the Mid-West before returning home to the East Coast, where over the years, she and her husband raised two kids and an assortment of dogs. During stints in advertising, children’s media publishing, and education reform in the former Soviet Unions, she wrote whenever she could.
Her love of early American history has its roots in family vacations up and down the East Coast visiting old forts and battlefields and places such as Williamsburg, Mystic Sea Port, and Sturbridge Village. During this time, she daydreamed in high school history classes, imagining the everyday people behind all the dates and conflicts and how they lived.
Claiming her best ideas are born of dreams, Kathy has written a number of stories over the years. Her first published novel, Winter Fire, a 1998 Golden Heart finalist in historical romance, was reissued in 2010 by Books We Love, Ltd., which also released Lord Esterleigh’s Daughter, Courting the Devil, and The Partisan’s Wife.
When not writing, she enjoys reading, cooking, photography, genealogy, playing “ball” with the dogs, and rooting on her favorite sports teams.

About the Series: The Serpent's Tooth

Lord Esterleigh's Daughter: “...this is a dark Gothic tale of love, revenge, and scandal.... The characters are well-drawn and three dimensional – in even the secondary characters you see the author's skill at making them real...." –Straight from the Library

Courting the Devilis a high caliber historical drama. I commend Ms. Fischer-Brown on her research and attention to detail. It moves well with interesting characters and story lines....Two thumbs up for Courting the Devil.” – Writer Wonderland

The Partisan's Wife: "I absolutely loved this book! The attention to detail was incredible – it was obvious that the author spent a great deal of time on her research. From the actions and speech patterns of her characters to the way the settings were depicted, I could feel like I was living during the Revolutionary War, watching the story as it unfolded.” – Once Upon a Book

Also in Series: The Serpent's Tooth

You have subscribed to alerts for Kathy Fischer-Brown.

You have been added to Kathy Fischer-Brown's favorite list.

You can also sign-up to receive email notifications whenever Kathy Fischer-Brown releases a new book.