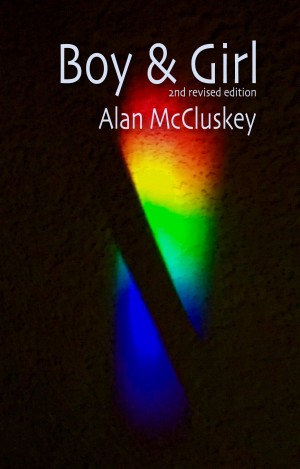 By Alan McCluskey
When Peter awakes in a girl’s head, he is delighted and alarmed, but his secret yearnings have not become reality. The girl is from another world. Both are driven from their homes, her by invading priests, him by a conflict. To make matters worse, a new girl at school vows to kill him. The stage is set for a desperate struggle, but will ingenuity and fervour win out against folly and fanaticism? More
When Peter awakes in the head of a girl, he is both delighted and alarmed that his secret yearnings have become reality. Very quickly, however, his error is apparent; this girl is not him. Kaitling –that’s her name– is twelve years old, like him. She’s the daughter of a magician, a prominent figure in another world. Boy and girl travel back and forth from each other’s minds but have little time to get acquainted before the island is overrun by warrior priests and she has to flee. At home, a conflict erupts when Peter is caught wearing his sister's clothes. He takes refuge at a friend's place. Meanwhile at school, a haughty new girl goads him about his girlishness and, spitting in his face, vows to rid the earth of him. The stage seems set for a desperate struggle to survive, but will ingenuity and youthful fervour be enough against folly and fanaticism?

Alan McCluskey lives amid the vineyards in a small Swiss village between three lakes and a range of mountains. Nearby, several thousands of years earlier, lakeside villages housed a thriving Celtic community. The ever-present heart-beat of that world continues to fuel his long-standing fascination for magic and fantasy.
Whether it be about Sally, Brent and Keira in The Storyteller’s Quest or Peter, Kaitling and Fi in Boy & Girl or in In Search of Lost Girls, all Alan McCluskey’s novels tell the story of young people who, despite the immense difficulties that abound, discover and develop their own astounding talents and manage to do the exceptional.
Alan McCluskey’s latest novel is Stories People Tell, a coming of age tale. He has published three YA novels in The Storyteller’s Quest series: The Reaches, The Keeper’s Daughter and The Starless Square. He has also published Boy & Girl and its sequel In Search of Lost Girls.

You have subscribed to alerts for Alan McCluskey.

You have been added to Alan McCluskey's favorite list.

You can also sign-up to receive email notifications whenever Alan McCluskey releases a new book.