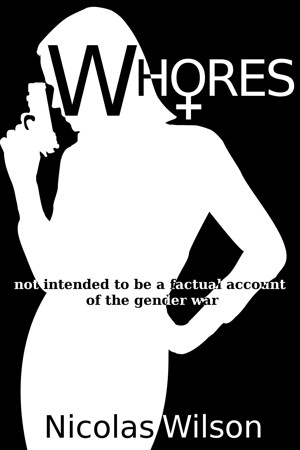 Whores: not intended to be a factual account of the gender war

By Nicolas Wilson
Rated 4.25/5 based on 4 reviews
In the near future, women’s rights are eroding, and those who buck the system are hunted as gender criminals by the authorities and rogue militias. This harrowing dystopia is seen through the eyes of a woman cast into a resistance group by circumstance, and a newly minted gender crimes detective tasked with bringing them to justice, as he grapples with whether or not that word still has meaning. More
Reviews:

"... this dystopia is message based, a throw-back to issue driven stories like A Canticle For Liebowitz or Planet of The Apes, unlike current novels like Hunger Games where the dystopia is an arena for the action... even though flawed, this political dystopia is chillingly thought provoking."
- Mark

"This very well-written, gritty novel has an extremely fast-paced plot with graphic violence. Readers with conservative leanings may struggle with this book... it is definitely worth a read!"
- Kerry

"... the writing style is refreshing...it makes what really is quite a dark, gritty and violent story into something almost enlightening..."
- Josiah

Nicolas Wilson is a published journalist, graphic novelist, and novelist. He lives in the rainy wastes of Portland, Oregon with his wife, two cats and a dog.

Nic has written eight novels. Whores: not intended to be a factual account of the gender war, and Dag are currently available for e-reader, and will soon be available in paperback. Nexus, The Necromancer's Gambit, Banksters, Homeless, The Singularity, and Lunacy are all due for publication in the next two years, as well as several short story collections.

Nic's work spans a variety of genres, from political thriller to science fiction and urban fantasy.

For information on Nic's books, and behind-the-scenes looks at his writing, visit nicolaswilson.com.

This is not a novel for the faint hearted. It's a hard hitting and graphically explicit account of a time when women's rights are not so much being eroded as being totally annihilated. Contraception, abortion and even basic women's health care is illegal. Women are treated little better than walking incubators and the gender criminals who dare to fight the law are hunted, tortured and made a public example of to deter any other women from daring to challenge legislation.

The book throws you straight into the action as the police storm an illegal abortion clinic. The violence is graphic but not in a gratuitous way. The underground resistance use equivalent force to fight for their rights as the police do to uphold the draconian laws.

The story is told from different perspectives which gives balance and completeness. Whatever your opinions on women's rights, the authors unique insight on the subject will get you thinking outside the box and perhaps questioning your own morals. You soon come to sympathise with the plight of the underground resistance. How could any government make it a crime to treat breast cancer or end a molar pregnancy? How could any sane human being uphold such laws?

It's not an easy read, the violence is graphic, the language explicit and the subject matter challenging, but the story is compelling and you won't be able to put it down.

Disclaimer: I received a free copy of the book in exchange for my honest review.

Say in the near future men’s rights get a real foothold in the U.S. political arena and women’s reproductive rights take a plunge. Not a controlled dive, but a hit-the-bottom-of-the-quarry, backbreaking dive. Would a lot of women fight back? With lethal force? In Nicholas Wilson’s “Whores” we are treated to a dystopian near-future U.S. in which they do. As the gender war progresses, the reader gradually hears the chilling personal tales of the fanaticized women in one particularly active cell.

What I love about near-future speculative fiction is that it functions as a “what if…?” If it is well done it offers us a mirror for subtle commentary on contemporary society while at the same time offering an exciting story in which readers get some tantalizing glimpses of where science and technology might take us. ‘Whores’ emphasizes sociology over hard sciences and technology to an unusual degree, as it successfully gives a number of freedom fighters unique voices in a society that has shut them out. Frankly, it was all pretty horrible, as it was meant to be, and that made ‘Whores’ a surprisingly compelling read.

To the author’s credit this is far from a one-sided story although it is hardly even-handed: there are good and bad men and women and likeable and unlikable police and terrorists. On the whole it seemed well balanced, although it would have been nice to hear something from someone functioning in society but not part of the actual warring parties.

There is a lot of crude language and violence, including sexual violence, in ‘Whores.’ That’s my warning, because otherwise I strongly recommend ‘Whores’ to anyone who wants to take an enlightening trip into what I hope is an alternative future we’ll never reach.

I received a gift copy of this book in exchange for an honest, non-reciprocal review.

(reviewed the day of purchase)
Kevis Hendrickson reviewed on Jan. 10, 2013

Whores by Nicolas Wilson is a gritty exploration of a not too distant future where the Battle of the Sexes has gone totally wrong. Wilson paints a bleak future where women have lost their rights and are treated by society as second-class citizens. A series of interconnected events are related, revealing the harrowing plight of a small, but determined group of women and men who fight to overcome the oppression of women and the extreme lengths the government goes to put a stop to them.

Aside from the solid writing, what impressed me most was how convincingly the author portrayed this world. It’s hard not to be moved by the personal accounts of the women in the story who suffer horrible atrocities in its telling. There is one scene in particular that gives me the chills every time I think about it. Even more noteworthy is how real this all seems, as if it would only take a little nudging for our own society to mirror the one in this book. In some ways, it already does.

I enjoyed the journey with the characters and found many of the best moments to be when they shared their personal histories. My only complaint is that there was a bit of proselytizing in the book that grew tiresome after a while. Much of the language is coarse, reflecting the gritty atmosphere. But overall, this is a highly polished and well-presented tale with intriguing characters. I would definitely recommend this story to anyone who ever wondered what the world would be like if society's discrimination against women went into overdrive.

I've read a few of Nic's in-progress novels on his blog, and was excited to see Whores presented in an easier-to-follow format than reading blog entries.

This is an odd novel. It's fairly short, probably more of a novella than a full novel, and I finished it in a single night. While a lot of the characterizations and dialogue handles tough issues like sexual abuse, torture, and poverty deftly, there's still a gritty pulp feel to it,and many bits of dialogue that could have been written by a pop-culture obsessed 14 year old boy, albeit one who was born in the 80's.

I was surprised how much I was affected by Whores. I am fairly politically aware, and once I started researching some of the elements that shape the political climate in Whores, I was disgusted by how many of them are rooted in the political culture of the past few years. While Whores definitely takes the current gender conflicts to a level that is pretty unthinkable with the mechanics of our government, the misogyny and sexual conflict is rooted deeply enough in reality to resonate.

I am a survivor of abuse, and sexual assault, and normally I hate seeing it in books. Authors don't seem to treat it as anything more than a plot device, gimmick("As if it wasn't enough that he is politically at odds with our character... He's a CHILD MOLESTER!!!" Dun dun duuuuuuuuun),or a barely concealed rape-fantasy. That's the thing that made Whores shine to me. Even though the violence and abuse described is graphic, gratuitous, and hard to fathom, Nic writes about it with humanity, focusing on the victims, how they respond, the choices they have to make to recover, and the ways it affects the community around them, as well as the societal causes that have made that kind of violence, if not acceptable, tolerable.

Even though the sensitivity to his "victims" was the element that stuck out the most to me, because of my own experiences, it's a comparatively small part of the overall novella. Nic usually writes very terse, graphically violent stories, and Whores is no exception. Most of the lead characters are at best, criminals, at worst, terrorists, and the plot follows their fight very closely. It's certainly not for the faint of heart. Nic seems to take a perverse pleasure in incorporating acts of sadism and violence to even the good-guys actions that is unsettling. As you read it, you KNOW you should be thinking "God. They're as bad as what they're fighting". But in context, it feels like karma.

Certainly Whores is not for the faint of heart. But it's well written, and relevant for anyone currently living in the USA, of breeding age.

You have subscribed to alerts for Nicolas Wilson.

You have been added to Nicolas Wilson's favorite list.

You can also sign-up to receive email notifications whenever Nicolas Wilson releases a new book.