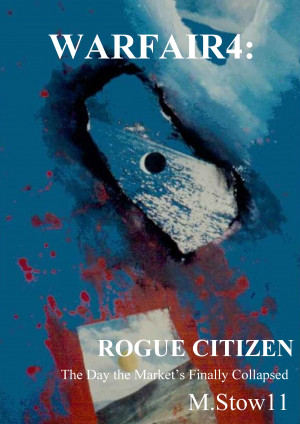 By M. Stow11
Part One: The Day the Stock-Market’s Stood Still...A pseudo-economic discursive text novel and proto-political world history since the Big-Bang's of nuclear scientific and financial open-market's Bubble-Crashes and banking crisis' of the C2000's.
Crisis' of ideology, and failure of faith. Leading to war. More
With a panoply of shadowy virtual and real others. Characters made out by their speech and understanding, stories and games that merge and weave their way, in and out.
Underlying violence and betrayal simmer as negotiations for each participant, including the readers' own point of view as our own personal Banker and Accountant. The issues of the day are more and more about immediate survival.
But more than that, for superiority and certain success through corruption and deceit; with winners, and losers.
Learning what it is to have and not-have.
To love, and lose life.
Download: epub mobi (Kindle) pdf more Online Reader
rtf lrf pdb txt
Price: Free! USD
Add to Library
Create Widget
Tags: democracy government economics globalisation credit dictatorship credit crunch banking crisis money and barter oil and natural resources
About M. Stow11

The author Malcolm Stow was born in Essex England, lived in the east end of London, and now lives in the suburbs. He is a philosophy graduate from the University of London, and hold a masters degree in Social Science Research with the University of East London. He has had a varied career outside of authorship, from working from an early age in kitchens and then bars and cafes in London and the South of France, working the vendange in France, picking melons and fruit, working in Hotels in Aylah Eilat, He has travelled widely for pleasure and work, to the US and Far East, and looking to reach Australia on the Bucket List.

After an apprenticeship in plumbing and heating engineering after leaving school, he discovered he did not have the head for numbers and calculations, or the back and knees for this work. He had visited Greece and studied philosophy and history through the Encyclopaedia Britannica in the Library there, completing an education incomplete of at least this aspect of knowledge and life.

He went to London University as a mature student, to continue studying philosophy. Following the attaining of this honours degree took up the training, and profession, of Social Work.

His writing reflects a deep passion for people and humanity, in the smallest as well as the greatest achievements and failures of our species. He embraces the philosophies, as well as the mythology and religions of peoples across the globe, their politics and economics (in so far as anyone can claim to have any grasp over these latter aspects); and the social and family ties of understanding and compassion, which span all of his works to date.

His three works published so far are: Walter Mepham (a first world war (his own) family saga); WarFair4 (a novel); EarthCentre (an epic prose or graphic poem subtitled: An Anthropic Odyysey) and Universal Verses 1-3 (a continuation of EarthCentre:The End of the Universe).

All, apart from Walter Mepham, are awaiting final editing and completion through 2014-15, and may only be seen on Smashwords currently.

You have subscribed to alerts for M. Stow11.

You have been added to M. Stow11's favorite list.

You can also sign-up to receive email notifications whenever M. Stow11 releases a new book.