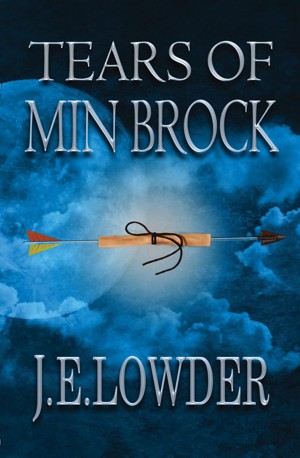 By J.E. Lowder
Rated 5.00/5 based on 4 reviews
The Dark War is over. Betrayal, defeat and death forever accompany any mention of the battlefield known as Min Brock. The shining kingdom of Claire is no more. Any hint of rebellion is supressed by the constant drone that echoes throughout the land. The Oracles of the Council of Ebon forbid even mentioning the name of the King of Claire, on pain of death.

Yet in the night... a whisper comes. More
Areall crept toward the parchment as if an evil spirit possessed it. “Its beauty is its deception,” she whispered. “Burn it, child. Destroy it or you will curse us. The Cauldron will know. The Cauldron will see. They will come.”

Elabea calmly lifted the parchment from the coals, where it had refused to burn. “How can something so beautiful be evil?”

The Dark War is over. Betrayal, defeat and death forever accompany any mention of the battlefield known as Min Brock. The shining kingdom of Claire is no more. Any hint of rebellion is supressed by the constant drone that echoes throughout the land. The Oracles of the Council of Ebon, the dark lords who feed the perpetual flames of the Cauldron, forbid even mentioning the name of the Only, the King of Claire, on pain of death.

Yet in the night... a whisper comes to Elabea, a girl of 14 summers, who hears and dares to believe there might be more to life than the drone. Accompanied by her lifelong friend, Galadin, Elabea embarks on a dangerous journey to become one of the most powerful creatures in the land - a storyteller. Along the way she must learn to discern the true whisper of Claire from the counterfeit whisper of Ebon. One might lead her to restore light and life to a world ruled by darkness. The other leads to certain death.

Also in Series: War of Whispers

Reviews of Tears of Min Brock by J.E. Lowder

I was given a copy of this book by the author, J.E. Lowder in exchange for an honest review.
I really loved this book! It just kept getting better the farther I got. I loved the storyline, the characters are loveable. I found myself wiping away a few tears as I read. A great fantasy world. Will definitely be reading more from this author. There are several main characters, similar to Lord of the Rings. You have to pay attention to keep them all straight. For this reason I think that ages 14 and up would best understand it all, but a good read for jr. high students as well. The story is set in a society with strict rules and regulations about everything. The people live in fear and have given up on thing ever changing, but there is a whisper of hope! I give the book 5 stars.

Lowder creates an awe inspiring world in the first novel of this series. This world is a mix of medieval and the fantastical. It melds brilliantly in order to create a uniquely new and solidly built world as a backdrop for this awesome novel. It also has all of the usual elements of a fantasy tale – magic, war, fantastical creatures, character names that you’ve never seen before and will never see again, etc – but Lowder puts these all together with a twist. Through this tale he brings to light the importance of stories to spark the imagination in those of all ages, which is true not only in the story but in the world as a whole. It’s all about the power of the written word – something we experience every time we read but rarely, if ever, find as the subject matter for a series. Lowder also develops an intricate history of the land that is presented in the way of the bard. It is so captivatingly real that you feel yourself traveling through time with the storyteller.

The main characters in this novel are quite well developed. I enjoyed that they all started together only to travel on a few separate journeys. Yet, at the same time you have the feeling that they will be reunited in the future. By following their separate trials and challenges you get to know a great deal about the characters, the land in which they live, and the challenges that they face. I love that none of the characters are intrinsically good or evil. They all had their choice. They could choose which whisper to follow. None were forced. The battle of willpower was interesting to see, and the choice was left to each and every character: to fight for good, to fight for evil, to do nothing.

This novel was a brilliant escape from reality that kept me wrapped up in its brilliantly fabricated world with equally amazing characters. This is definitely a series that I’ll be following closely throughout.

Tears of Min Brock is an enjoyable fantasy novel. The world is expansive; the concept of storytellers being powerful really intrigued me. Lowder's writing style is pleasant to read. He's descriptive, and uses comparisons and a variety of sentence types, so the reader can see his world and characters. Each character had their own voice and objectives. The creatures throughout the novel are interesting and creative. I haven't come across their like before.

However, there was one thing I did dislike about the novel - the fact that it is so allegorical. A lot of "tales" and events sounded like biblical references or inspirations. When I first came across this novel, I had no idea this would be the case. However, upon pursuing his website in search for a map (which every good fantasy novel needs), it appears this was part of his inspiration for writing. Personally, I tend to avoid Christian lit or novels with Christian overtones or undertones. So that aspect was a bit off-putting for me. Had it been strictly fantasy without any hidden meanings or interpretations, I'd have enjoyed it more. But as each began more and more obvious, I sighed.

In spite of that, it was still an interesting concept and world. I look forward to reading the sequel and seeing how their adventure continues against the Cauldron and towards finding Claire.

Note: I received a free copy from the author for a fair and honest review.

I highly recommend this book for people who like epic fantasy novels. Though it has many plot lines, I enjoy them all and feel that this element adds a lot to the story. Stories with one single plot line and a few characters might interest some people, but I'd rather have a more complex story any day. Read this story and you won't be disappointed.

You have subscribed to Smashwords Alerts new release notifications for J.E. Lowder.

You have been added to J.E. Lowder's favorite list.

You can also sign-up to receive email notifications whenever J.E. Lowder releases a new book.