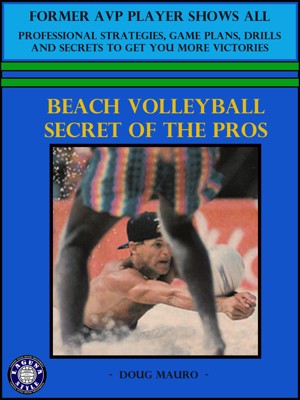 Beach Volleyball- Secret Of The Pros

The disclosed secrets took Doug up to 15 years to learn, through playing in tournaments, practicing with the best players in the world, and competing at the highest level in the world. These secrets can only be learned through an exorbitant amount of experiences, but now they are out in the open for all to elevate their game at a much more rapid pace. Jeff Rodgers, Sean Scott, Misty May, and Kerri Walsh should even read this to gain insight to their game. AAU sand volleyball players are encouraged to read this piece and keep it with them at tournaments to develop game plans and get more victories.

Whether you are a begginner or a professional, this book should be carried with you during all competitions in order to have the strategies and psychological tips and tricks at your fingertips at all times.

In this book, you will learn how to deal with referees, partners, talking on the court correctly, what the signs mean, how to serve sky balls, game plans,training techniques and drills, strategies for victory, mental toughness, and much much more.

David Smith from Hawaii- "I really like your playing tips because they are easy to understand and implement, and bottom line, they work." David received his AAA rating before he read this book.

Inch for Inch, one of the greatest volleyball players to ever play the sport. Standing at 5'81/4", Doug was the shortest player on the AVP Tour while practicing and playing with or against legends like Karch, Mike Dodd, Randy Stoklos, Tim Hovland, Daine Blanton, Adam Johnson, Pat Powers, Steve Timmons, Brent Frohoff, Rob Heiger, and more.

If he was successful against these giants, don't you think he would know more about the game than the average Professional?

You have subscribed to alerts for Doug Mauro.

You have been added to Doug Mauro's favorite list.

You can also sign-up to receive email notifications whenever Doug Mauro releases a new book.