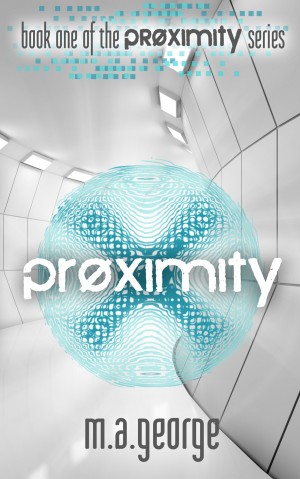 By M. A. George
Rated 5.00/5 based on 2 reviews
She's an alien whose home world doesn't even know she exists.
He just inherited a planet, and now he's running from it.
She has spent a lifetime hiding in plain sight.
He wants to escape the spotlight.
Her touch can heal.
His wounds are deep.
Two hearts, two planets collide. It's the perfect union.
Except the part where the world's about More
"M.A. George blended just the right amount of sci-fi and romance together to create a compelling debut novel that leaves readers needing the second installment in the series immediately. She developed a complex world that’s unique to Proximity and a different planet from Earth altogether impeccably."
-- Mallory, Cover Bound

"I thoroughly enjoyed each and every page! It is a fast paced, unique love story that mixes in equal parts of romance, paranormal and suspense."
-- BookWorm Brandy

She's an alien whose home world doesn't even know she exists.
He just inherited a planet, and now he's running from it.
She has spent a lifetime hiding in plain sight.
He wants to escape the spotlight.
Her touch can heal.
His wounds are deep.
Two hearts, two planets collide. It's the perfect union.
Except the part where the world's about to end.

Writing is what keeps her up into the wee hours of the night. Fortunately, she has a lot of energy (Read: caffeine is her friend). She has a bit of an obsession with music (It does a fantastic job of tuning out rambunctious children while she attempts to focus).

She sincerely hopes people out there enjoy reading her work as much as she enjoys writing it. And if anyone hears of work for a super top secret agent, she’s now available (Discretion guaranteed…).

Learn more about M. A. George

Reviews of Proximity by M. A. George

I picked up this book on an author-giveaway-day on Smashwords. Somehow I forgot that I already had it. Then Kindle had a freebie day and I pick it up there, too. Does that ever happen to you? I look at the cover, it does play into how I feel about a book. Then I read the blurb and about the author. This book must have passed those criteria with flying colors!

After a slow start, getting to know the characters, Proximity took off. I was hooked. From about 60% of the book, I couldn't stop reading. In fact, I was still reading at 5 this morning. Thank goodness for an ending that didn't leave me hanging. Sure there was a few threads that need to be taken care of, but I was left elated which, of course, made me wakeful, wondering how the next bits will be taken care of. (Non-spoiler enough?)

I can't wait for payday so I can get the next book. Thank you M.A. George for writing such a different, kind of story. Oh, and I need to mention how I loved that the characters were very well educated with goals and talents, along with a little romance. Very good!

Proximity
Beginning with the healing hand on the cover, the other-worldly, science fiction story of Proximity by M.A. George, begins.
The first-person narrative catches your attention right off the bat with short descriptive sentences. The main character, Dr. Palta Capal, readily admits to being an American born alien of parents from the Earth’s nearest habitable planet, Ononti. The list of other characters are introduced in a reasonable length of time; those with foreign names having characteristics that are easily remembered; unlike other stories where too many characters with strange names are introduced too quickly for the leisure reader to digest.
The narrative was descriptively easy to read and not “over-killed” with lines of numerous adjectives and “way out there” science fiction stuff. There are no green balls of slime, or monsters but somewhat believable space-connected circumstances. I had a feel for the personality of each character and a very clear picture of the geographical settings depicted. Each chapter ended on some measure of suspense or yearning to read about what happened next. The story moves quickly. The reader is caught off-guard on many occasions with twists to the expected storyline.
I am not usually a sci-fi reader but sincerely enjoyed this one. Of course a little romance never hurts! The author wanted the reader to feel what it would be like to be a “normal” alien (if there is such a thing). In this case, Dr. Palta Capal, is the normal alien, functioning as normally as possible in an earthly world; actually knowing no other, since she was born on Earth. She deals with her “alienness” as well as possible until she meets Eric Moran. Then life changes swiftly.
I would recommend this book to a wide audience. The appeal is very general and tasteful. I anxiously look forward to the next one in the series!

You have subscribed to alerts for M. A. George.

You have been added to M. A. George's favorite list.

You can also sign-up to receive email notifications whenever M. A. George releases a new book.