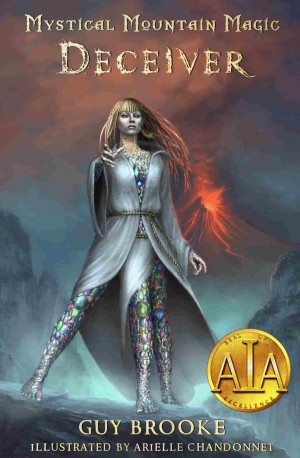 Guy Brooke grew up fascinated with the lyrical words of songs. How could he, too, manipulate such emotions? After years of writing 100 plus songs, producing two self-published music albums, crafting and directing three original musical plays, and conducting five guitar concerts through San Juan College in Farmington, New Mexico, it proved to be easy for him to cross over into colorful rhyming stories for children and young adult fantasy novels. Guy loves life, loves the young, and loves to write. Residing in Naches, Washington with his wife, Barbara, Guy wishes to continue manipulating words for the young readers until carpal tunnel takes its toll : ))

This has been a great read so far! I love the unique characters in this book! This would be a great read for any young adult or teen with a great and fast paced plot! This is one I will have to share with my daughter soon! I look for to reading the next one!

This was a wonderful read! Its a great story with an amazing plot and characters. Igneous was a great character to come to love and enjoy in his travels. I cant wait to share this book and the next one with my 11 year old son who is as much an avid reader as i am.

What a wonderful story! I like the mixture of history and fantasy! The authors descriptions paint a picture of the land and I really like the pirate angle! I never read these types of books as a child but this story has drawn me in and I 've already spread the word to my daughters and grandchildren about the series!

I've only just begun to read this tale, but like all great stories, the author draws you in immediately. I'm fairly certain that I am in for a grand adventure! I will write an update after I've read it all. So far, it seems to be a good read for young and old alike.

Part way through and have to write a review. Love the style and aristry. Cannot wait to let my children read them and see what discussions come from that!!

This book is an unbelievably inventive and plot twisty sort of epic fantasy that is at once peculiar, original, fresh, and fun.

Deceiver begins with the 'Wahooo!' of Skye, a settler to someplace unburdened with the history, greed or machinations of typical expansionist European empires, and his near-death ascension to the summit of Misty, the sentient mountain. Along with Misty, Skye also has the unique opportunity to meet Igneous, the forthright, yet cheerful caretaker beneath the mountains. He quickly gets a crash course in saving the world, and then literally gets a crash course in leaving Misty. Near death again, Skye needs to save the Anasazi village before their chief, Bending Tree, succumbs to his injuries.

Conflicts abound in Deceiver, both from without and on the mountain… eventually pandhandlers come seeking Misty's riches while some malevolent force terrorizes Misty's inhabitants with sweet song and a rotten heart.

Chief among Deceiver's virtues is a beguiling ability to get the reader into the action from the word go. Using a somber, yet oddly hopeful and cheerful tone reminiscent of another generation, the author brings us to a world where hope is an endangered species, but the most important species of all, and where humor breaks out from unexpected places, like shafts of light on a cloudy day. Readers begin to feel the sort of Bradbury-like power of the author to evoke moods and emotions with seeming ease.

Characters are strongly written, beginning with Skye and proceeding on to the native Anasazi people, along with the naïve yet wise, funny yet ages-old Igneous, and later Toby and Erikson, who play dual roles as villains and comedy relief, an interesting mix. Later, even Mariah and her caretakers each have their unique voices and culture.

This tale is brimming with magic in a loosely defined age of exploration world (though there is a pretty sweet map), and yet this is far from the traditional sword and sorcery tale. Deceiver begins with promise, delivers, and transforms into something else entirely in just a few hundred pages. Yet throughout, the same tones and subtext run just beneath the surface, binding three separate acts together into a strong unified whole. Another reviewer likened this to a Native American folk tale, and I'll echo that apt observation here.

If there are any critiques to be made about the book, the first is that it seems rather full of thick vocabulary and sentence structures for a YA audience. The second is that the book, as part of a trilogy, eschews a resolution to the climax. Though a minor resolution does occur, there doesn't seem enough of a recovery or 'falling action' or whatever one might call it. And while the Deceiver itself is undeniably a part of the book, and an important one, its role is only just ramping up by the end of the book.

The good news is that you don't have to wait for the continuation of the tale. Redeemer, book 2, is already available.

(reviewed 6 days after purchase)
hippophant reviewed on May 18, 2014

This was a very exciting book full of fantasy, fun and adventure! I love the eccentric but very lovable guardian of the mountain, and surprisingly I really liked the humor between Erickson and Toby too (the 2 bad guys), Bless the king ;)
I loved how the author used some great imagination throughout the book; stones that have a healing liquid inside of them, large 6 foot eagles caring for a young orphaned human girl, and the craziest, creepiest mysterious villain ever!
I felt like I was sucked into the book, almost like when the characters saw visions inside of the blue liquid, it was like I was there bobbing around in huge bubbles, riding the ginormous eagles and plummeting down waterfalls along with them.
Great story, great author. I can't wait to read Redeemer! I wonder if there's going to be a whole series coming out like the Lion Witch and the Wardrobe? If so, I'll take one of each please :)

You have subscribed to alerts for Guy Brooke.

You have been added to Guy Brooke's favorite list.

You can also sign-up to receive email notifications whenever Guy Brooke releases a new book.