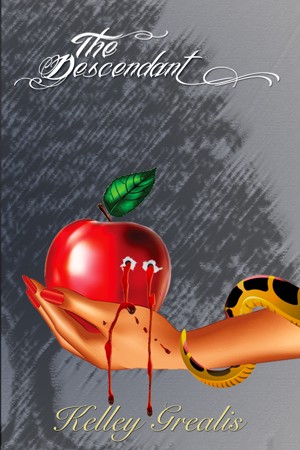 By Kelley Grealis
Rated 4.50/5 based on 4 reviews
The Descendant reveals the biblical origin of the vampire through the experiences of a woman who discovers she's a descendant of the first vampire. More
Mortal death or eternal damnation? If those were your choices, which would you choose?

Allison Carmichael is frustrated with the doctors who can’t diagnose her seemingly common ailments. Her frustrations are further compounded by her inability to discover her life’s calling, a purpose she desperately desires yet which has eluded her for thirty years.

When Allison discovers the source of her ailments and the truth about her biblical lineage, she wishes she hadn’t searched so hard for the answers she thought she wanted.

Faced with an impossible decision – sacrifice her mortal life or damn her soul for eternity – which will Allison choose?

And can she decide before the choice is made for her?

Kelley Grealis has loved all things vampire since she was a kid. It was that fascination, combined with the need to know how the first vampire was created, that compelled her to write the type of vampire novel she had always wanted to read. Kelley was born and raised in Cleveland, Ohio and continues to live in the area with her husband and their two fur babies. She likes her cars fast and motorcycles loud and is a craft beer snob. When she’s not writing, she’s working at her day job, cruising in her convertible or enjoying a beer at her favorite local brewery. Connect with Kelley on her website www.KelleyGrealis.com.

Also in Series: The Descendant Vampire

Vampires. Cleveland. On the surface, the two go together like skateboards and horseradish. However, in the hands of a gifted novelist like Kelley Grealis, the two concepts marry quite nicely. (The former two; even Ms. Grealis couldn't succeed in pairing the latter two.)

In short, Allison Carmichael is feeling unfulfilled. She has always believed that she holds a special destiny, as did her parents, and she hasn't discovered it as yet. Compounded with strange symptoms which no doctor can tie to any sort of malady, her life is spiraling … into a traffic accident that will change her life, and introduce Vincent and his immortal clan into it.

I enjoyed this first look into Allison Carmichael's life, but I felt the book needed to move along a little bit faster. There was a lot of mood-setting; **A LOT ** of mood-setting. An exploration into truths, some of which appear to contradict. (Which, of course, means that not all “truths” turn out to be true – I don't think that's much of a spoiler.) A couple of limited action sequences were interspersed for a change of pace; the best of those coming towards the end.

By the time I reached the end of “The Descendants”, I felt that most of my questions were answered. A few were not; most of those, I believe, were intentionally left hanging. (OK, I AM still confused by the “children of Adam and Eve” – wouldn't that be ALL of us??) I have the sequel in hand; perhaps I shall learn more by reading “The Search”.

WARNING: The cover blurb, in my opinion, is too revealing – I suggest you NOT read it before tackling the book.

RATING: 3 ½ stars, rounded up to 4 where partial stars are not permitted.

DISCLOSURE: I received a copy of this book free of charge, with the request that I provide and post an honest review.

Allison had always been told that she is special and will do something great with her life. But, as life usually turns out, Allison is stuck in a job that she can’t stand in a town she feels trapped in. And when she comes down with a mystery illness that gives her an extremely sore stomach and throat, uncontrollable body temperature and insomnia, she puts it down to the ‘mid-life crisis’ she feels she’s in. What’s even stranger about the sickness is that no doctor can diagnose her with any illness and continually sends Allison home with no aid to get rid of the awful pain. Even though the doctors can’t diagnose anything wrong with Allison, her husband Matt knows she isn’t imagining things as Allison’s insomnia keeps him awake at night!

To try and cheer her up, Matt takes Allison to a friend’s birthday party. After a few drinks, Allison doesn’t feel any better and drives Matt and herself home. On the drive home, Allison and Matt’s car is crashed into and she and Matt are knocked unconscious!

Allison wakes in a hospital several days later asking for her husband. She is shocked to find that her husband has been dead for three years and that the crash has caused her to lose some of her memory. When she is discharged from the hospital, Allison is driven home buy a friend. When she arrives home, she discovers pictures of her in another handsome man’s arms but has no idea who the man is! That evening, the mysterious man comes around to Allison’s house and introduces himself as Vincent and explains that he and Allison have been dating for the last year. At first, Allison does not believe his story, but after spending more time with Vincent, she realises that she does in fact love him and accepts that her beloved husband Matt did really die three years ago.

However, Allison soon realises that Vincent holds a very dark secret and that there is a reason why she has always felt special in her life. As Vincent reveals, Allison is not just a normal human being but a descendant of the first ever vampire, Cain! Allison is thrown into a world she never realised existed. But because of her infamous ancestors, Allison is hunted in the vampire world by Luscious; an evil vampire obsessed with ending Cain’s lineage! Vincent and his siblings must keep Allison safe but that is no easy task…

For me, this was a book of two halves and even though I did enjoy both halves I thought the story behind the first part of the book was really great. I loved the mystery behind Alison’s illness and why she was feeling depressed and unfulfilled. I also thought the mystery behind her car crash and the death/memory loss over Matt made the book really interesting to read. This is because you kept asking yourself ‘was or wasn’t’ he really alive? Plus, Vincent’s character was much more appealing in this half of the book. He was the cool, rich kid who wasn’t afraid of a good time.

However, in the second half of the book (the part that introduced the vampires) I thought the mystery behind Matt was forgotten right until the end. I also found Vincent really annoying! I don’t want to give too much away, but I think maybe Grealis made him more unlikeable on purpose (which does sort of make sense when you read the book) but I still preferred him in the first half. Nevertheless, I did like the idea of the Secret Coven and I think it would be great that if in the next book the different members back stories were broaden a little more.

All in all, I did enjoy this book but I preferred the first half to the second. I would suggest this book to anyone who enjoys Vampire novels such as Legacy of the Vampire: The Pits by Kristofer McLaren or novels such as Destine by Katherine Polillo.

I really liked the ideas behind this book.
Well written tale of the Vampire beginning.
I truly loved the story. This is not your typical Vampire tale.
Great style,incredibly addicting.
5 stars!

(reviewed the day of purchase)
Gigi Siguenza reviewed on Dec. 26, 2012

This was the December 15th-29th selection for the Indie Love Book Club on facebook and I have to say I was pleasantly surprised by this book. It began slow, then picked up pace rapidly, and before I knew it, I was unable to put it down. I love the new twist on the origin of vamps, and the way those origins fed into the plot, as well as how that all played into the characters' motives. The cliffhanger ending leaves plenty of room for a second book and leaves you eager to continue the tale. Well done, Ms. Grealis, well done. I am looking forward to book 2 so I can find out what happens in her journey next!

You have subscribed to alerts for Kelley Grealis.

You have been added to Kelley Grealis's favorite list.

You can also sign-up to receive email notifications whenever Kelley Grealis releases a new book.