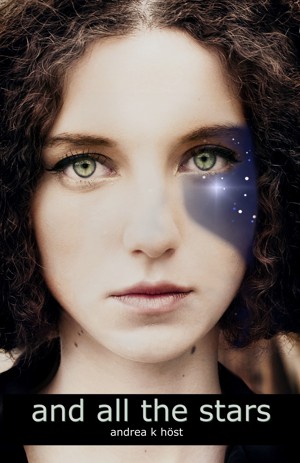 And All the Stars

By Andrea K Höst
Rated 4.00/5 based on 1 review
Is it an alien invasion? Germ warfare? They are questions everyone on Earth would like answered, but Madeleine Cost has a more immediate problem. At Ground Zero of the Sydney Spire, beneath the collapsed ruin of St James Station, she must make it to the surface before she can hope to find out if the world is ending.

Madeleine Cost is working to become the youngest person ever to win the Archibald Prize for portraiture. Her elusive cousin Tyler is the perfect subject: androgynous, beautiful, and famous. All she needs to do is pin him down for the sittings.

None of her plans factored in the Spires: featureless, impossible, spearing into the hearts of cities across the world – and spraying clouds of sparkling dust into the wind.

Is it an alien invasion? Germ warfare? They are questions everyone on Earth would like answered, but Madeleine has a more immediate problem. At Ground Zero of the Sydney Spire, beneath the collapsed ruin of St James Station, she must make it to the surface before she can hope to find out if the world is ending.

Reviews of And All the Stars by Andrea K Höst

"And All the Stars" is another science fiction love story, with basically teenage characters centred around a heroine who sees herself as a 'non-special' person. This young group again saves the day - in this case Earth.
This book definitely has Andrea's stamp on it style wise.
I was somewhat passed the half way mark when I got the feeling, at the pace the story was progressing and it looking like a slow climb up from the bottom, that the ending would be in another future book - ahhh!
Then the story takes a couple of very unexpected twists with the bottom seemingly lower than first thought - but twists can go both ways!
It is a good feel to have a world disaster seen from Australia, and the fight-back led from there as well!
If I had to be critical of anything it would be all the usual utilities that people tend to take for granted staying on-line. Things like electricity, water, sewage systems, communications, etc. Our infra structure is fairly delicate, especially without 'human' repair persons to put things right that often (but not generally noticed) go wrong.
I would have been totally wrapped to have read Sci-Fi stories like this when I was a teenager (though certain detailed scenes would not have had the same understanding from my generation back in the pre to early '70's) - and even though I'm getting close to the top of the hill, I still enjoyed the tail very much.
I like stories that have epilogues so you aren't left dangling (mentally), and it doesn't mean the story is closed as someone with an imagination like Andrea must have, it could be picked up at a later point with either a slightly older group, or a group of their children. It could stay on earth, or go off-world. It could be the same menace either way, or an 'after effect' from the menace. The possibilities could keep going on.
Congratulation Andrea on adding another fine book to your stable.
Colin.