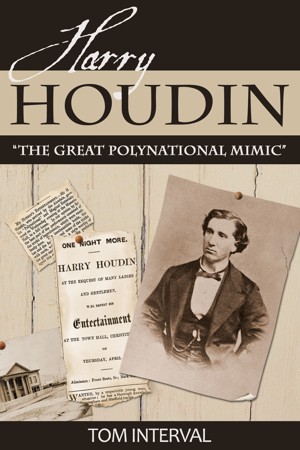 Houdin, who billed himself as "The Great Polynational Mimic," toured Australia and New Zealand between 1860 and 1863 with a one-man act featuring drawing-room magic and international impersonations done to song and dance.

A member of the Academy of Magical Arts (AMA), International Brotherhood of Magicians (IBM), and Society of American Magicians (SAM), Interval has captivated tens of thousands of people at numerous venues, including Busch Gardens theme park in Williamsburg, Virginia, where he portrayed a medieval conjurer, complete with a period costume and British accent. During his time at Busch, he also trained employees of the magic shop and promoted the park on several local TV talk shows along the East Coast.

Interval, who has a BA in professional writing, has published articles in international magic journals and local newspapers and magazines in his hometown of Pittsburgh. A major fan of the legendary Harry Houdini, Interval also conceived and created the website, Houdini Museum (houdinimuseum.org), and is now working on several other magic-related writing and website projects.

You have subscribed to alerts for Tom Interval.

You have been added to Tom Interval's favorite list.

You can also sign-up to receive email notifications whenever Tom Interval releases a new book.