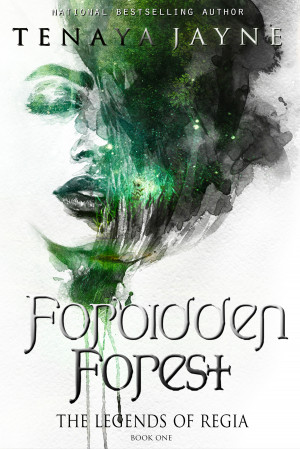 By Tenaya Jayne
Rated 4.33/5 based on 3 reviews
Shape Shifter/Elf hybrid, Forest lives by the sword, fighting for respect in a world that hates her for being a Halfling. Assigned a black ops mission in a time of war, Forest must protect her enemy, the vampire prince, Syrus. Through the danger, Forest and Syrus learn how thin the line is between love and hate. But it doesn't matter what they feel. Forest is forbidden. More
Born in shame. Cast from society. Shape Shifter/Elf hybrid, Forest must fight for any respect she can get. Targeted in her youth by a vampire noble who placed an illegal slave mark on her, she is forced to obey him, no matter what.
Slipping the grip of her master and abandoning the prejudice of Regia, her native world, Forest takes a job on Earth, guarding the portal, using her skills as a warrior to enforce Regia's laws. Now, called home for a black ops mission, Forest must put aside her own prejudice to transport the vampire prince, Syrus, through enemy territory in a time of war.
Prince Syrus, mage and master of the Blood Kata, wants Forest more than he's ever wanted anything. In spite of their mutual mistrust, their attraction cannot be denied. Through the danger of their mission, and the secrets they both keep, it doesn't matter what they feel. Forest is forbidden.
Download: epub mobi (Kindle) pdf more Online Reader
rtf lrf pdb txt
Price: Free! USD
Add to Library
Create Widget
Tags: romance fantasy paranormal urban fantasy
About Tenaya Jayne

Reading my bio, huh?
Real life sucks. I bet you feel like that sometimes, maybe even right now. That’s why I write fantasy. I need to escape depression, bitterness, bills, illness…I could go on, but you get it. In the pages of fiction, I can slay the dragons, triumph over the bad guys, be immortal, and never struggle with love handles. For a short time, I can let it all go, and be everything I can’t be in real life. Maybe you’re hurting right now. Maybe you’re in the waiting room of the hospital, or just stuck in traffic. I’ve brought a portal. Come with me…Let’s ditch this crappy popsicle stand and go somewhere great, where we can forget all this, at least for a while.

That’s why I write. I’m not an author, I’m an escape artist.

About the Series: The Legends of Regia

Also in Series: The Legends of Regia

Ok, for the record I'm writing this review while T'ed off because I've just had a bit of a shock to the system. Yep, it was the sudden and unexpected "The End" that I ran up against. The story doesn't frickin' end. Seriously, what good does half a story do me? Why do authors keep doing this? It pisses me off every single time.

So, looking past the lack of ending (I can do this, really), I thought that the story was pretty good. It was predominantly a love story, since the whole 'gotta get Syrus through the Wolf Forest' just seemed to be an excuse for the two of them to be thrown together. Very little actually happened in regard to the supposed dangers and many of the solutions felt miraculous since we were given so little of Forest's history ahead of time. (She knows her way around the living maze of a forrest because she grew up near there. Oh, ok, didn't know that. She is mysteriously protected because she befriended a ghost at some earlier time. Oh, that's nice for them. Can bluff her way out of Philippe's clutches because she's traded with him in the past. Great. etc)

So even though I thought some things went a little too smoothly for the pair I did enjoy their back and forwards banter. I like how fragile Syrus could seem at one moment and then badass the next. I like how strong Forest was supposed to be, even if she did little more than cry and fall apart in actuality.

To recap, I was pleased with the general story. There is obviously a lot more going on, with political intrigue on the horizon and the whole Leith situation yet to be resolved. But I had a hard time settling into the story for a few reasons. The rather abrupt switch from modern Austen to medieval Regia threw me for a loop. I then kept spinning since the language was undisputedly modern and there were a lot of modern earth wares popping up as smuggled items. (See here, we have to eat out Lucky Charms by torchlight and wear a sword with our Levis.) The history between Forest and Leith is just barely sketched out but immensely important. I needed to know more about it. And finally I just basically needed to get to know Forest more. It's not that her character is shallow or anything, but we're told that there is a lot more to her than we see and it would have been nice to get if those detailed. Then of course, on the other end of the book, after finally settling into the story it just up and ends on you.

What a great read! I think this book would make an excellent movie. Highly recommended!

This was really a wonderful story. It was exciting from start to finish. Excitement, plots, intrigue you name it and of course romance. Can't wait for the sequal in the Summer!

You have subscribed to alerts for Tenaya Jayne.

You have been added to Tenaya Jayne's favorite list.

You can also sign-up to receive email notifications whenever Tenaya Jayne releases a new book.